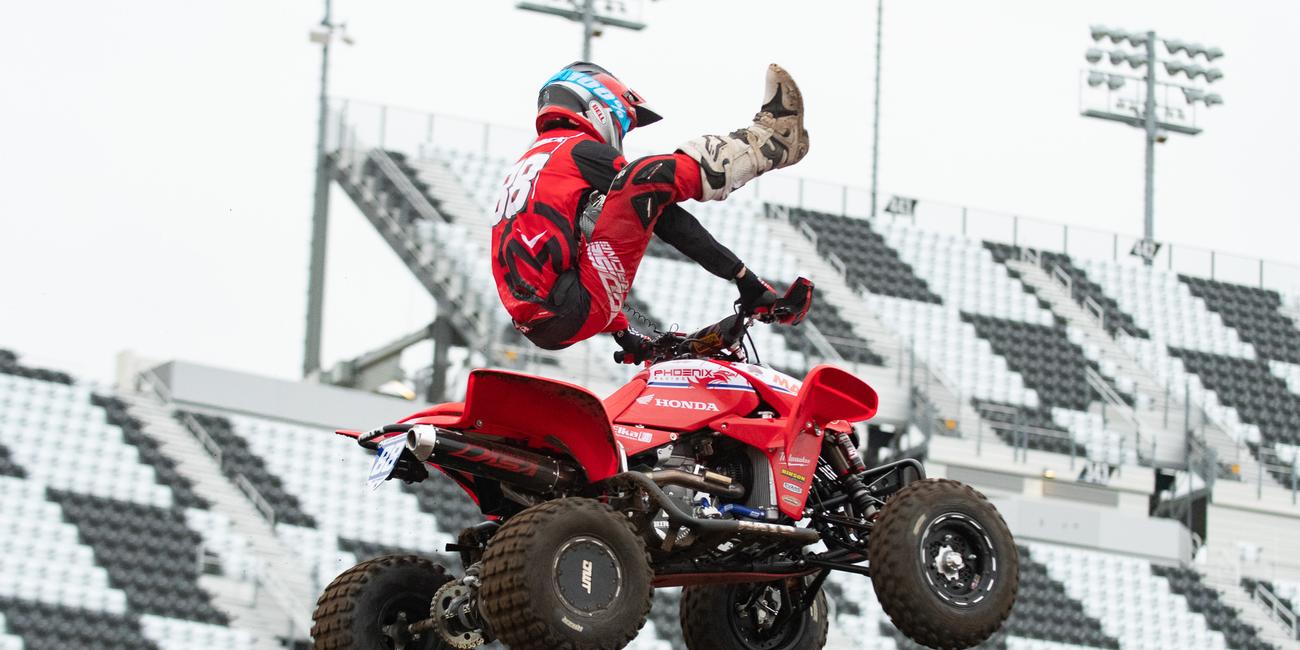 DAYTONA BEACH, Fla. (March 14, 2019) - The highly anticipated Daytona ATV Supercross (ATVSX) was no disappointment to the Pro racers, as well as the many spectators that ﬁlled the grandstands to watch the day unfold. A long oﬀ season had the competitors eagerly waiting for the drop of the gate, especially Phoenix Racing Honda/Maxxis/Elka’s Joel Hetrick and Wienen Motorsports.Yamaha/Maxxis’ Chad Wienen. Wienen came into round one sporting the number one plate after edging out Hetrick by one point at the final round last season.

The gate would drop and it was Hetrick out front taking the holeshot and wasting no time in setting the pace as things sorted out behind him. For the most part Hetrick ran unchallenged as the action heated up behind him. The laps were racking up as Hetrick showed the world once again he has everything he needs to work his way back to carrying the number one plate. As Hetrick wrapped up his ﬁrst Daytona ATVSX win, he will have instilled a ton of conﬁdence in an already dominating force.

The ﬁght for second was shaping up as the defending champion, Chad Wienen, was looking for every advantage to ﬁnd some speed to help close the gap on Hetrick. Looking and taking new lines did not work out as Wienen made a serious mistake allowing several riders to overtake his position. Time was running out as Wienen had to ﬁght his way back towards a podium ﬁnish if he was to save this round and every coveted point. After a hard fought lap, Wienen made the pass on Thomas Brown to take over the third spot and would ﬁnish the race holding the ﬁnal podium position.

For Bladwin/Jeff Rastrelli Land Grading/Ford Brothers Racing Honda’s Jeﬀrey Rastrelli, the mistake by Wienen may have opened the door for his second place ﬁnish. However, he proved he was ready to race for a podium finish as soon as the first gate drop of the year came down. Before the race, Rastrelli had his familiar smile and the angst seemed to be missing or he at least had found a happy medium in the stress that builds before every moto. His ﬁnish here at Daytona could be just what he needs compile a constant podium ﬁnishing season.

Finishing in fourth was TBrown 84 Training/CST Tires’ Thomas Brown, who put in a solid eﬀort, and came close to ﬁnding a top three ﬁnish. Brown is a hard charger and his persistence on the track has kept him a championship contender season after season. Rounding out the top ﬁve was GennUSA Racing/CST Tires/Corrosion Specialties’ Nick Gennusa who battled his way through the main and appears to be ready to make a run up front as we head into upcoming rounds.

This year majority of racers felt that the track was one of the best they have had a chance to race on inside the iconic Daytona International Speedway. With a good ﬂow and plenty of technical sections, combined with a soft berm and loam, mistakes were costly. While this round doesn’t always show how the season will play out it is a great indicator of who put in the eﬀort in the oﬀ season and who will be ready to shake things up as we look to round two.