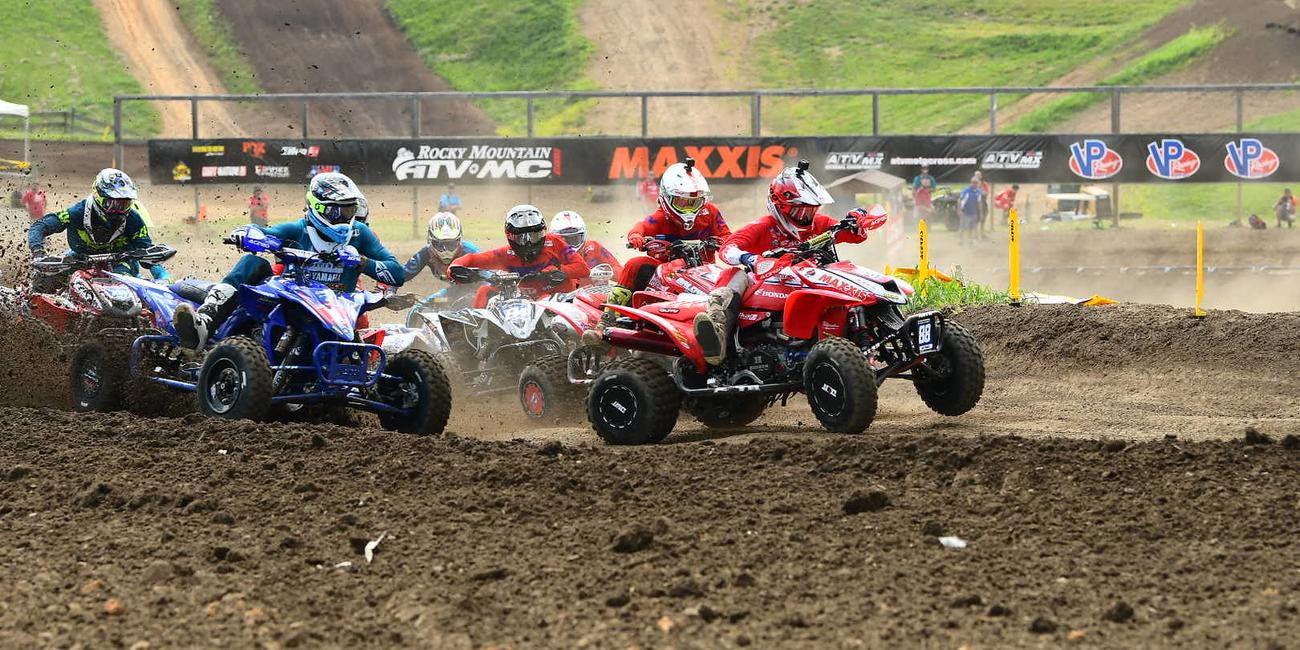 BLOUNTVILLE, Tenn. (May 28, 2019) – Phoenix Racing Honda/Maxxis Tires/Elka Suspension’s Joel Hetrick would seem to be all but unstoppable at Muddy Creek Raceway as round five of the 2019 ATV Motocross National Championship (ATVMX), Series, an AMA National Championship, took on a very demanding and rough track.

With a track that featured an ever changing racing surface, higher temperatures than many have faced thus far this season and plenty of sunshine. The weekend would be a welcomed “dry” event as rain has impacted nearly every race this season. With sections that went from blue groove hardback to a choppy mulch laden with ruts and horsepower robbing depth, Hetrick put on a display for the fans that provided one of the best motos of the season.

Securing the Dirt Nation Fastest Qualifier Award, Hetrick started moto one off by nailing the SSi Decals holeshot and racing through the moto virtually unchallenged to take the moto win. The track may have had its demands, but Hetrick aimed to make a statement as he faces a points battle that will take him winning every moto and nearly every race after a crippling mechanical issue at round three. With a moto win scored, Hetrick’s attention turned to moto two.

Hetrick showed up on the gate with a fierce tenacity looking for another win and when the gate dropped, he would take off earning another holeshot. However, he would quickly find himself in second as a three-way battle for the lead was now blowing up the Tennessee track. Lap after lap the action remained intense as fans would cheer and gasp as the trio was locked in battle with no signs of letting up. Just past the midway point, Hetrick made his move and overtook the lead as the crowd erupted and continued running from fence-to-fence while trying to keep up with the action. The intensity quickly dissipated as the front runners spread out and finished the moto as Hetrick locked up the overall win here at Muddy Creek.

For Wienen Motorsports/Yamaha/Maxxis’ Chad Wienen, the first moto looked like so many others this season and most of the 2018 season. After powering to the runner-up position, Wienen would comfortably take second yet at this round you could tell that he was out for a win. The battle in the opening moto never seemed to present itself, but in moto two the champion was under the gun after going wide in the first turn forcing him to reenter the track. It was all over in mere seconds and if you blinked you would have never known there had been an issue just seconds into the moto. Wienen would take over the lead and the energy level on and off the track headed to the moon as the legendary Yamaha vs. Honda battle was as heated as ever. Fending off charge after charge Wienen was laying down a brutal pace while defending lines constantly as Hetrick seemed to be able to run anywhere he wanted and was forcing things into the stratosphere showing the leader he was not going down without a fight. Hetrick would make things happen and Wienen found himself back in the runner up spot as the Hetrick powered away closing the moto with a win and sending Wienen back to the second place position.

The wildcard this round was Tbrown84 Training/CST Tires’ Thomas Brown, who like Wienen, ran moto one safely and without much in the way of any real threats. However, in the second moto Brown would find himself again running in third, but this time he was squarely in the fight for the lead and if a mistake was made by the leaders he could have capitalized easily and been the victor. This is the race Brown has been looking for and instead of merely earning a podium finish he was able to run with the leaders and while he rolls out of Muddy Creek with another third he knows where he can train to be able to become a threat for wins.

GennUSA Racing/CST Tires/Corrosion Specialties’ Nicholas Gennusa would have a solid race as he went 5-4 on the day for fourth overall on the day. Gennusa has had some success thus far in 2019 and currently holds down fifth in points. Ryland Johnson Racing/GBC Motorsports/Ye Olde Cycle Barn’s Westley Wolfe powered his way to a fifth overall finish as he continues to have a consistent start to the season, after struggling during a few motos that should have had him moving up through the pro ranks in the points standings.

Nine6Nine/Barker’s Exhaust/Walsh Rach Craft’s Alan Myers is off to a very successful season and would ride to a 6-5 day taking sixth overall. It appears each round he is able to get stronger, adapt and has remained fairly consistent throughout the first five rounds of competition this year.

Coming through seventh overall was Corrosion Specialties/Londerville Steel/Maxxis Tires’ Brandon Hoag after scoring seventh in both motos. Jeff Rastrelli Land Grading/Baldwin’s Jeffrey Rastrelli managed to hold onto eighth overall after struggling in the first moto, finishing fourth. Then in the second moto Rastrelli would find himself tangled up after the start, then suffered from a fuel boiling issue causing his machine to cut out at different place on the track. Rastrelli would come through 12th in the second moto.

Muddy Creek ATVMX National
Blountville, Tennessee
Round 5 of 10
Saturday, May 25