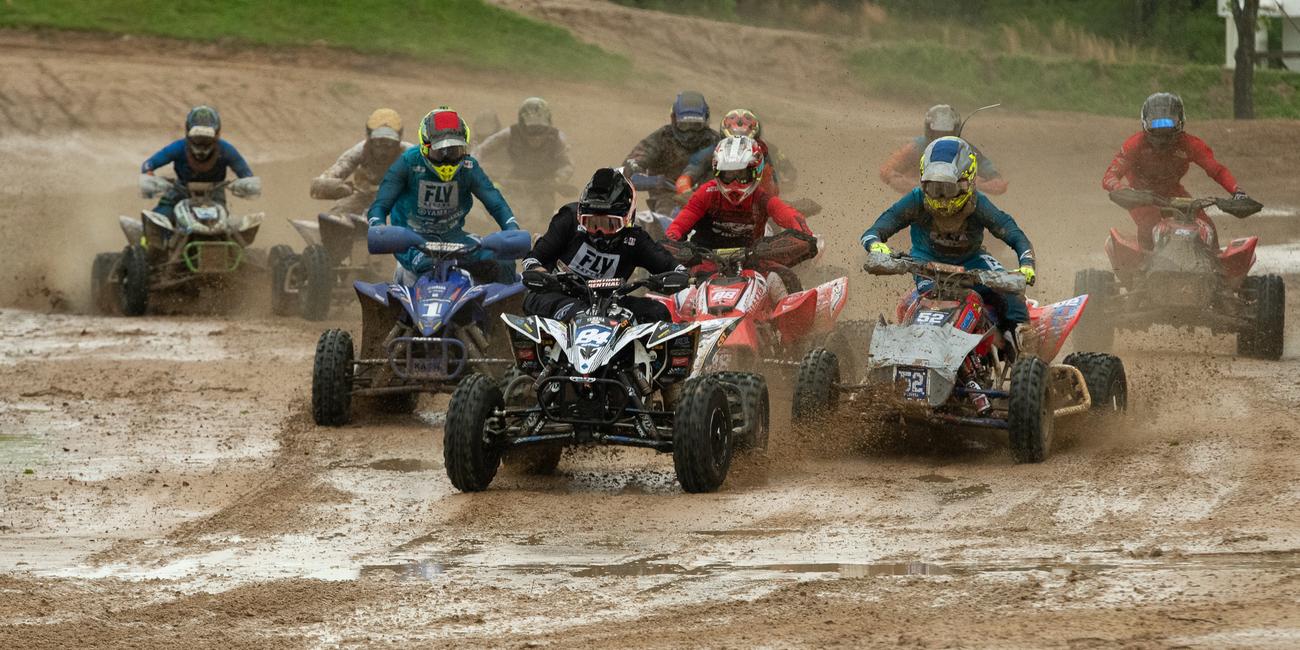 KEMP, Texas (April 8, 2019) – The 2019 ATV Motocross National Championship (ATVMX), an AMA National Championship, headed to the state of Texas this past weekend for another highly anticipated round of racing at the Underground ATVMX National. The racing action would not disappoint even as mother nature did her best to wreak havoc on a pristine motocross track, which featured a lot of changes since the series was there in 2018. Tbrown 84 Training/CST Tires’ Thomas Brown would take full advantage of the conditions and stand tall in the saddle as he claimed the overall win.

One thing on everyone’s minds as dawn broke was the threatening skies as riders and their teams prepared for the upcoming day. Fans were ready for another Phoenix Racing Honda/Maxxis/Elka’s Joel Hetrick and Wienen Motorsports/Yamaha/Maxxis’ Chad Wienen battle, and the top two were never out of the conversations throughout the facility. Hetrick claimed the fastest qualifier award and the numbers behind him were minuscule further adding to the excitement and angst that was building as the rain fell.

Unfortunately, lightning strikes around the facility forced a lot of delays which had nerves on high as changes were made to tackle the first moto. Brown would get an incredible jump off the gate, securing the moto one SSi Decals holeshot award, as the field of racers worked their way through the first sections of the track. Soon Brown would notice a very patient Hetrick shadowing him through the muddy conditions.

After a slight bobble by Brown, Hetrick was in command of the moto and racing his way to the win. Brown would regroup to take second and Wienen third as the stage was set for moto two. Ryland Johnson Racing/GBC Motorsports/Ye Olde Cycle Barn’s Westley Wolfe would have an excellent first moto, coming through in the fourth place position. Jeff Rastrelli Land Grading/Baldwin’s Jeffrey Rastrelli rounded out the top five in moto one, after battling with Wolfe and some of the AMA Pro rookies, Nine6Nine/Barker’s Exhaust/Walsh Race Craft’s Alan Myers and Ford Brothers Racing/Fly/Maxxis’ Cody Ford who also finished sixth and seventh in that moto.

Further delays caused by weather conditions forced the final moto to run late in the day as looming clouds and light rain continued to set an ominous tone. The cheers from fans signaled the gate was about to drop and a feverous gate of Pro athletes launched off the line for their final chance to seize the day. Root River Racing's Dylan Tremellen would take the moto two SSi Decals holeshot award, and lead the field throughout the first part of the opening lap. However, the man on the move was the Texas-native Brown who overtook the lead and began charging hard to gain distance between his moto one nemesis Hetrick. What looked like a repeat of moto one quickly changed as Hetrick was forced to back off the throttle due to a small mechanical issue that would overtake his chances at an overall win.

Wienen wasted no time moving into the number two spot as the end of the moto drew nearer, but behind him the race for third was underway. With Hetrick doing all he could to hold his position, Rastrelli began closing the distance and in the final straightaway he would take the third place position as the checkered flag flew. Hetrick would come through in fourth, with Myers behind him in fifth followed by Wolfe in the sixth place position. The podium was set with Brown taking the overall win, Hetrick earning second overall, and Wienen rounding it out in third overall. After a stressful day things were finally settled, and on very excited Brown celebrated his home state win in grand style.

On Sunday, the newly added Production Stock class took to the track with Wienen earning a pair of moto wins, followed by Myers and Brown in second and third. Silas Lamons returned for the class and earned a third and fourth for a fourth overall.

Also racing on Sunday was the Pro-Am class where Logan Stanfield took the overall win with a pair of second place finishes on the day. Texas’ own Bryce Ford took the moto one win, but would suffer in moto two with a ninth place finish putting him fifth overall on the day. Wes Lewis earned second overall after finishing fifth at the conclusion of moto one, and then taking the win in moto two.