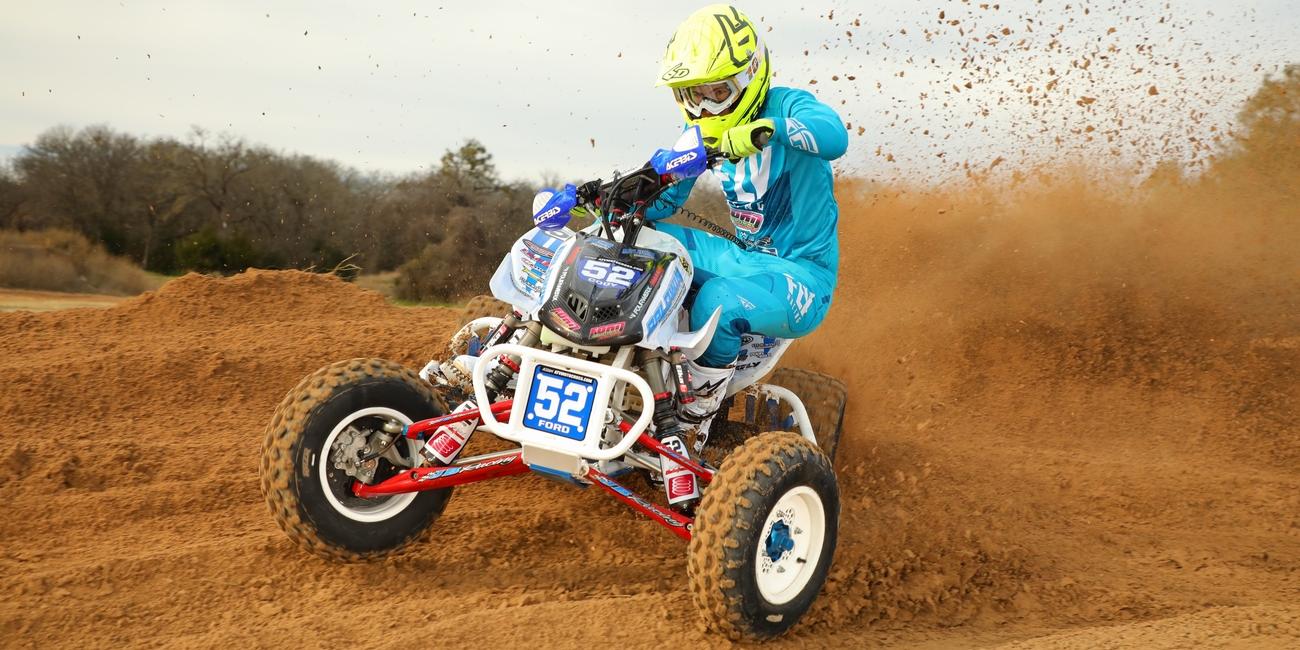 After seven long months of building anticipation, the countdown to the first gate drop of the 2019 season is nearly over. The AMA ATV National Championship Series kicks off its new campaign on Tuesday, March 12, once again in the historic infield of Daytona International Speedway. “The World Center of Racing” will play host to the best ATV racers in the world for the fifth consecutive year, however things will look a bit different this season. The AMA ATV Pros will headline Tuesday’s racing at the speedway. For the first time since its inception, Daytona will be a pro-only event for the ATVs and will be raced among select motorcycle classes. While pro riders will kick off their season at Daytona in March, all other ATV national racers will start their season in Texas the first weekend of April. Ford Brothers Racing has had plenty of Pro class presence over the past few seasons, but for the first time ever a Ford brother will be representing the team in the AMA ATV Pro Class.

After a number of successful seasons that saw Cody Ford’s #52 successfully climb the ranks of ATVMX, the nineteen-year-old Texan looks to make his Pro class debut at Daytona just a few short weeks from now. Cody enters Pro class racing as part of one of the most stacked rookie classes in recent memory. Ford, who has developed the nickname “The Foreman” for his assertive nature and wise-beyond-his-years qualities, looks to approach his rookie season one race at a time with an emphasis on speed and endurance.

“I’m nervous to be lining up with the best quad racers in the world, but I feel very lucky to have such a great opportunity. I’ve worked very hard for many years, and I am excited to work towards being a successful Pro.”

Cody acknowledges the challenges ahead but has been preparing both on and off the track to set himself up for success. With the guidance of veteran ATVMX Pro and fellow Texan, Thomas Brown, and Fit-N-Wise training, the nineteen-year-old has been perfecting his endurance and fine tuning the overall performance of both he and his machine throughout the offseason. Through his comments, you can see why Cody has earned the nickname of “The Foreman”.

“I use Thomas [Brown] to gauge my speed and preparation, so I’ll know what to expect coming into the pro class. I also enjoy riding with my brother, [Bryce]. Training together is a lot of fun and I don’t think I would enjoy racing the same way I do if Bryce wasn’t competing in the ATV motocross series. The support of my family is huge part of my life and my racing. Regardless of my success or failure, they stand behind me and keep me both positive and focused.”

When asked about his goals, Cody answered like a veteran saying the priority was to get through Daytona with a good start. He mentioned a top five finish in any given race would be special, but he’s just focused on one race at a time.

While Cody looks to stake their place in the AMA ATV Pro Class, his brother Bryce looks to make his full-time jump to the amateur classes from the youth ranks in 2019. The 16-year-old’s storied youth career concluded last year before he erupted onto the amateur scene with a win in one of the series’ top classes at the season finale. Bryce will look to show that was no fluke starting at the first full national event in his home state of Texas. Along with the Ford brothers, Gage Scalletti, Cash Harsche, and Brandon O’Neill will represent the team starting the first weekend of April at the Texas national event.

The Ford Brothers Racing Team looks to have a successful 2019 ATV Motocross National Championship season starting with the Pro debut of Cody Ford at the Daytona ATV Supercross. Cody’s number 52 will now don blue backgrounds, signaling he has earned the right as a professional of the sport. Following in the footsteps of his heroes that came before him, Cody sets out to begin writing the story of his pro career – one race at a time. Good luck Cody!