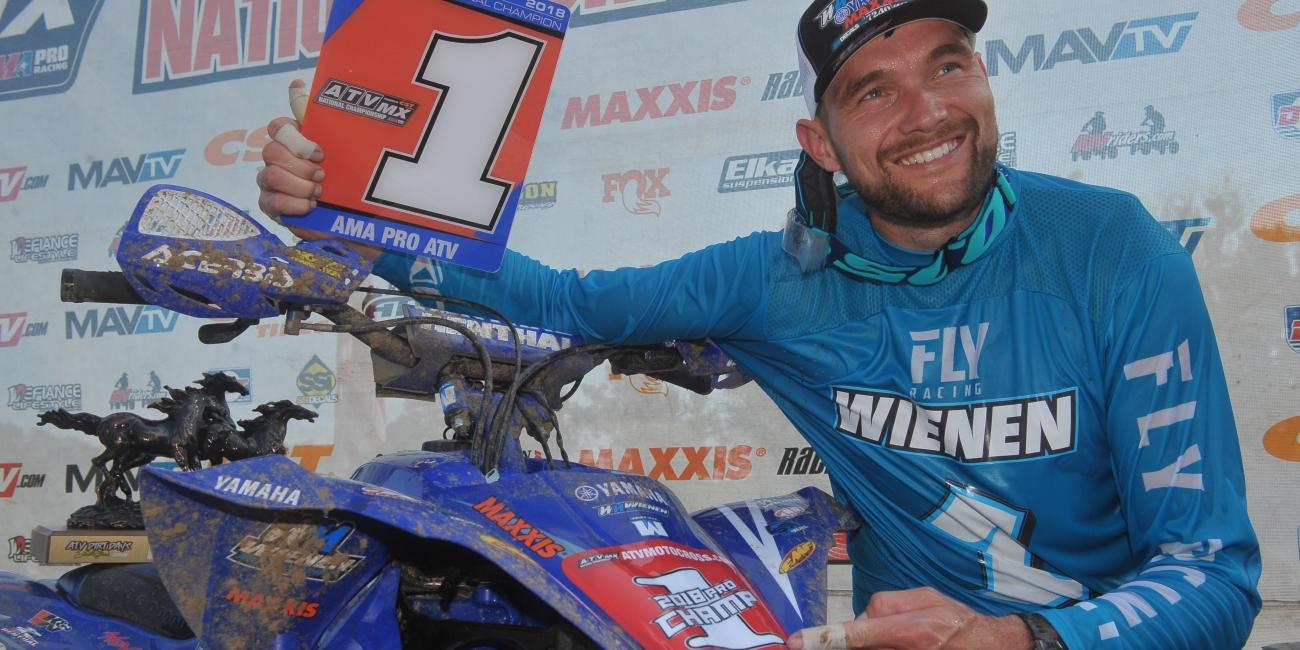 HURRICANE MILLS, Tenn. (August 13, 2018) – The ATV Motocross National Championship (ATVMX) presented by CST Tires, an AMA National Championship, came to an end for the 2018 season this weekend, August 11-12, in Hurricane Mills Tennessee at the historic Loretta Lynn Ranch. Only 10 points separated the top two riders in the AMA Pro ATV standings – Rockford Fosgate/Ti-Lube/Honda’s Joel Hetrick and Wienen Motorsports/Yamaha/Maxxis’ Chad Wienen – after their season-long battle came all the way down to the final moto of the year.

Tension and excitement filled the air as the AMA Pro ATV field took to the track Saturday, August 8. However, it was Tbrown 84 Training/CST Tires’  Thomas Brown capturing the ATVRiders.com Top Qualifier for the first time this season, however Hetrick would earn the $1,000 bonus for the season.

When the first moto got underway, GBC Motorsports/Hetrick Racing/Walsh Race Craft/Solo Pilot’s Westley Wolfe jumped off the gate and earned the SSi Decals Holeshot award. Wolfe would lead the first three laps before Wienen made his way through the pack. JH Racing/Walsh Race Craft/SSi Decals’ Zachary Kaczmarzyk also had a great start running in second and fourth before suffering from a mechanical issue on lap five.

However, everyone’s eyes were focused on the number one machine of Hetrick as he made his way around in sixth on lap one, just behind Wienen. It wouldn’t take long for disaster to strike, and just after the finish line heading into their third lap Hetrick’s chain broke. Puzzled and trying to put into words what had just happened Hetrick started to make his way off the track but would return with his mechanic, chain in hand, and on lap six Hetrick returned to the race.

But with Wienen running away at the front of the field, Hetrick’s back-to-back championship hopes were diminishing. As the checkered flag flew for moto one, Wienen would earn the win followed by Brown and Wolfe; Hetrick would come back and cross the line in the twelfth place position.

As the last moto of 2018 lined up and the gate dropped, it was Hetrick grabbing the SSi Decals Holeshot award and the early lead. Hetrick led the way through the opening lap and began to gap the rest of the field. Wienen would start the race out in the fourth place position and make his way past Wolfe for the third place position. As Hetrick dominated out front, Brown was running in the second place position and Wienen found himself in third and in the Championship lead by one point. Hetrick’s 12-1 moto results earned him a third overall, with Brown earning second overall and holding onto third in the points standings. Wienen clinched first overall with 1-3 moto results and earned his sixth ATV Motocross National Championship

GennUSA Racing/CST Tires/Corrosion Specialties’ Nick Gennusa was having one of his best races of the season with a podium finish in his vision. Gennusa would find himself tied for third overall, but with his moto finishes of 5-4 he would take fourth overall behind Hetrick. Baldwin/Jeff Rastrelli Land Grading/Ford Brothers Racing Honda’s Jeffrey Rastrelli was battling through both motos with a great amount of intensity. Rastrelli finished the day out in sixth but remained fourth in the National Championship points standings.

Hinson/Walsh Race Craft/Honda’s Parker Wewerka finished the day in seventh and holds onto the eighth spot in the points standings with Kaczmarzyk in front of him in seventh. Rockford Fosgate/Ti-Lube/Honda’s Haedyn Mickelson finished the year ninth in points and Root River Racing’s Dylan Tremellen rounded out the top ten.

As the moto two gate dropped for Pro Am, Mickelson knew he had to finish ahead of Hoag. It was Alan Myers who shot out of the gate and into the lead for the first three laps, however Noah Mickelson made the pass and began to lead the way on lap four. H. Mickelson had worked his way into the second place position ahead of Hoag, but as the white flag came out Hoag would come around before H. Mickelson. Wewerka had also pushed his way into the first place position on lap eight and with a moto score of 1-1 he would take the overall Pro Am victory at ATV Dirt Days. Myers held on for second in moto two followed by N. Mickelson. Hoag would finish the moto in fourth, and with moto finishes of 3-5 he would earn second overall and the Pro Am Championship. H. Mickelson came through in fifth and earned third overall on the day.