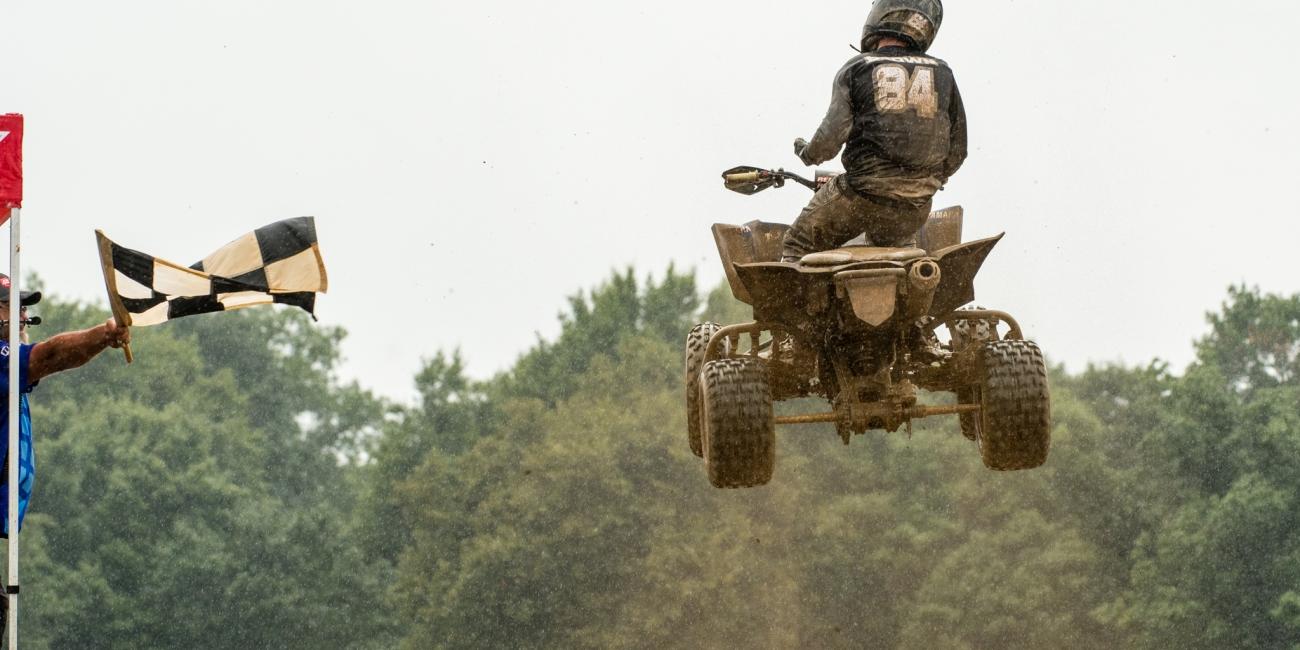 MORGANTOWN, W.Va. (July 23, 2018) - The tension coming into round nine of the 2018 ATV Motocross National Championship (ATVMX) presented by CST Tires, an AMA National Championship, was already at an all-time high as the front-runners were locked in a very tight points battle. As race time drew near, the forecast was not looking to be in favor of the riders lining up. With generally favorable conditions at each round this season, the riders have been left to focus on racing each other, opposed to being challenged by muddy conditions brought on by Mother Nature. This round was looking to be different though as heavy rains fell throughout the day on Friday, and storms lingered throughout the area on Saturday.

Rockford Fosgate/Ti-Lube/Honda’s Joel Hetrick controlled the points lead coming into the penultimate round, but Wienen Motorsports/Yamaha/Maxxis’ Chad Wienen was not going to back down. Hetrick and Wienen both knew they needed to go 1-1 on the weekend to keep the points lead or make up valuable points in the championship before heading into the season finale.

The first moto was faced with dry conditions as the storms surrounding the track failed to produce any rain, which came as a huge relief to the racers and fans. Hetrick had the Fastest Qualifier Award under his belt as he set the pace during timed qualifying. All eyes would fall on the defending champion as he took his position on the gate. RedBud has produced some very intense racing between Hetrick and Wienen and this moto would be especially anticipated when the gate dropped. Hetrick powered his way off the start to earn the SSi Decals Holeshot Award with Wienen on his grab bar as the class worked its way through the first few turns. Hetrick seemed poised to handle things on the track, however Wienen was hungry and before the first lap was complete had made the pass for the lead.

Charging hard around the track was Wienen, who was taking this moto with little challenge from Hetrick. Hetrick seemed content with holding second but speculations flew around of either a set up issue or merely he was not going to force the issue on such a rough track where it would be difficult to make a successful pass. The checkered flag flew and it was Wienen taking the win followed by Hetrick and Tbrown84 Training/CST Tires’ Thomas Brown rounding out the top three. Baldwin/Jeff Rastrelli Land Grading/Ford Brothers Racing Honda’s Jeffrey Rastrelli, who has been recovering from a practice crash injury before round seven, finished fourth in moto one followed by Hinson/Walsh Race Craft/Honda’s Parker Wewerka coming through in the fifth-place position.

As much as the weather cooperated in the first moto, it would quickly have a heavy impact on the second moto. As race time approached the rain began to fall, making for a demanding track into a slick and a challenging final moto. When the gate dropped for moto two, it would be Rastrelli streaking out front claiming the second SSi Decals Holeshot Award. A mass number of racers came together in the slick conditions as they rounded into the second corner, then as the riders cleared it was Wienen still visibly sitting feverously trying to get his machine going again.

Wienen would get back underway and start the task of working his way through the entire class as he watched his chance for the win slip away. Out front Rastrelli was doing everything he could to keep things moving forward and on track as he became the hunted. Brown was on the move taking the lead away from Rastrelli and beginning to set the pace for this moto as he charged ahead.

As moto two hit the halfway point Hetrick had worked his way into the second-place position, and it appeared that he was in good shape to finish the moto. As the conditions were worsening, Hetrick was looking to finish the race without an issue. Brown was having an incredible race out front, ultimately earning his first moto and overall win of the season. Hetrick earned second overall with Wienen finishing moto two in the fourth-place position for a third overall on the day. Hetrick now sits ten points ahead of Wienen in the National Championship points standings, and the battle now heads to the final two motos of the season in Tennessee.

After a holeshot, leading and running a very solid moto in horrible conditions, Rastrelli would earn the third spot in moto two and fourth overall. Behind those headed for the podium, Wereka would have an outstanding race at RedBud MX taking fifth overall after having a rough season filled with mixed results rounding out your top five.

The Season Finale takes place at the historic Loretta Lynn’s Ranch on August 11, 2018 where we will once again see a National Champion crowned.

Racer TV and MAVTV are the official homes for coverage of the ATV Motocross National Championship (ATVMX) events. All 10 rounds, from the season opening ATVSX inside the hallowed grounds of Daytona International Speedway, to the ATV Dirt Days finale at the historic Loretta Lynn Ranch in Tennessee, will air in 30-minue; taped-delayed telecasts on MAVTV, while Racer TV provides live streaming coverage of differing events. Catch all the action at www.mavtv.com and www.racertv.com.