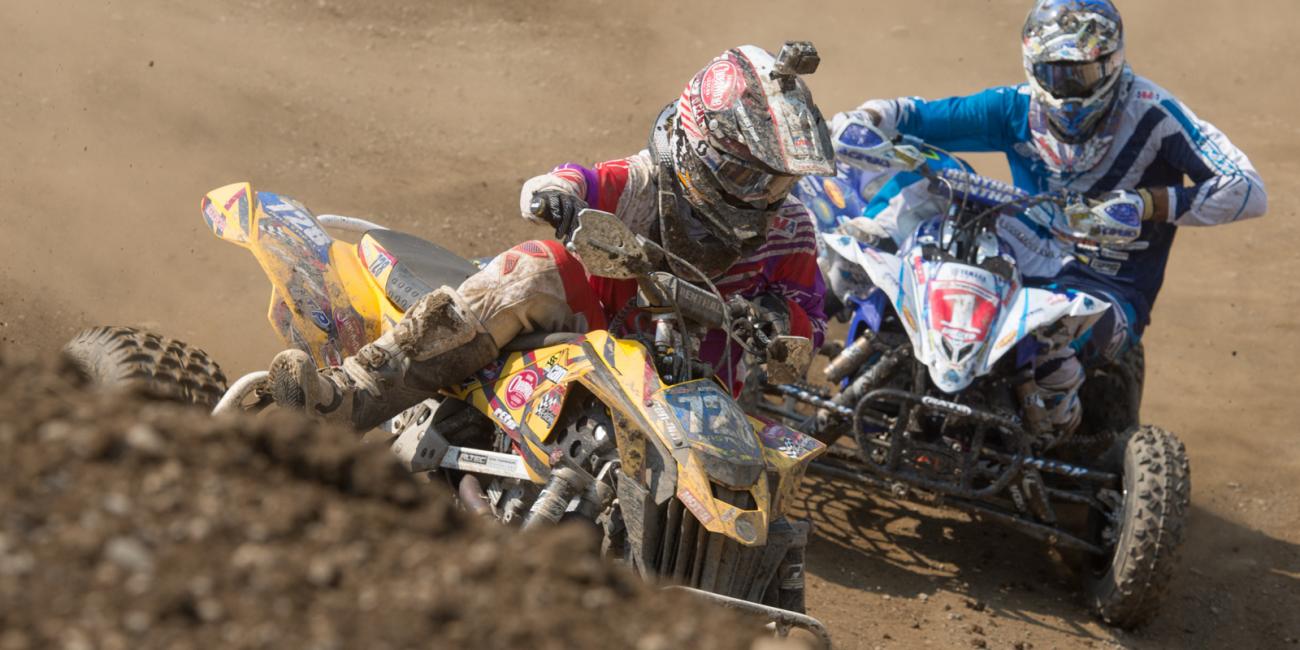 Only two rounds remain in the 2014 Mtn. Dew ATV Motocross National Championship and the season appears to be shaping up, as championships are becoming more and more a reality for some and only mere hope and dream of better years ahead for others. A look at the point race amongst individual classes shows that hard work, determination and the right amount of luck has played favors to some while others are left wondering what and where it all went wrong.

Some have had mechanical issues that seem to only be prominent on a national race weekend. Other riders have experienced injury and all have experienced quite possibly one of the most challenging seasons of their racing career. The next two rounds for many are crucial to the final standings and one can bet that both Red Bud and Dirt Days will yield some of the best racing yet this season.

Ken Hill talks about the Pro stuff this week so I thought I would briefly talk about the point standings and see where some battles are shaping up. In case you wonder how the points work, here is a look at the breakdown for championships from the ATVMotocross.com rules page.

Overall points will be earned in each class per event as follows*:

With that being said, In the Senior 40+ “Revin’Kevin” Poncrnich has 92-point lead over Daniel Domnizewski and appears to be the clear cut winner of this championship. In speaking with Kevin at Unadilla he said that he was racing for cancer awareness this season in support of a few of his friends that suffer from the disease. Kevin is also racing for a close friend’s memory that lost the battle with cancer recently. Kevin has been determined and focused all season. Don’t let it be said it hasn’t been without challenge. Kevin said until Ohio at round 5 he and Greg Miller had an intense battle. Unfortunately for the Greg and the battle for the Senior title he was injured and could not finish the season. Regardless Kevin worked hard all season and had the point lead when the injury happened so he knows he deserves this one hands down.

The Women class appears to have produced a new champion in 2014 as well. Starting the season everyone thought it would be all eyes on Katie Mette as Chloe Beurster was sidelined for the season. However, the big surprise that no one knew was that Megan Manshack who hasn’t seen a podium let alone a win in the better part of a decade was quietly working away in Texas getting ready for the new season and to hold true to a promise she made to her dad at the end of last season.

Megan Manshack opened the season with a big win and at the same time opened the eyes of many that this girl made a decision and went to work on becoming a champion. Megan posted 6 wins through the first 7 rounds and with calculations it appears as though she could sit the next two rounds out and still win the championship by 4 points if Katie Mette was win the final two rounds. So congratulations to Megan for her championship in the ultra-competitive Women Division.

As far as Mette goes, she came into the season behind in training as she had a very intense year studying for her college degree. Katie had to refocus her training efforts a little and was not able achieve the new level that Manshack had set for the class. As I said, Manshack surprised a lot of people and Katie Mette will be the first say she herself is one of them.

An interesting point to consider is that the Schoolgirl class saw a champion emerge as well. Maci Devenport whom returned to racing after a year all nearly dominated the entire season in this class. She won every round except for round 1 in Georgia. Maci had intentions of moving up to the Women Class on her 450 the final two rounds but it appears that she has reinjured her back at last week’s race in Unadilla. Maci thought she had pulled a muscle in here back but after going to the doctor earlier this week it appears to be a couple of vertebrae that had broken. She hurt herself on Friday landing “Sky Shot” raced and won her class not even knowing. This is one tough girl for sure and she will be a threat to win from the word go in the Women Class next season.

As far as the Girls Sr.Shifter (12-15) Class, Niamh Shaw has this one all but locked up. If Niamh does not compete and produce points and 2nd in points Abby Bowyer wins the final two rounds she could steel the championship by one point according to my calculations. However, I wouldn’t expect that to be the case and it looks like the British born Shaw will take the American title in 2014.

Bryce Ford appears to have locked up the 90 CVT (8-15) Class title. Ford enjoys a 72-point lead with two rounds to go and even with two wins 2nd place Corey Bost would come up just shy on points. I know this is a huge accomplishment for Ford but he is facing some other racing demons as he begins his move up in ranks. Ford appears to be a little more under pressure this season and though wins have been coming he is looking for more in other classes. Don’t be surprised to see this young man make that step to the next level next season. This young Ford brother could be one to watch in our sport. He has the potential for some huge things.

Max Linquist may be another that has locked up a title early 70 Open (6-11) Class. Max enjoys a 78-point lead over 2nd place Tristian Evans who has been a tough opponent in this battle. Evans even capture one win on the season but the 5 wins and two 2nds that Max has amassed appears to be too much to overcome with only two rounds to go. However, keep an eye on this class; you know that Evans wants to leave the season with a couple of strong rides to end the season.

As far as the rest of the championship battles go. It’s way too close to call any of them. It is by far one of the most competitive championships I have ever seen at this point in the season. The number of championships left to decide for the final rounds will probably shock many. It has been a great season and with the drops now starting to take effect we still won’t know the outcome of most battles till the dust settles at Dirt Days at Loretta Lynn’s Ranch in a little more than three weeks.

Let’s check it with Ken “I’m back and I have a new Mac” Hill:

Well, none other than Chad Wienen tamed the Home of Horsepower. There just is not any other way to put it, Wienen once again showed up, geared up and dominated. That cat just has his game together and beating him is proving to be more than just difficult. The domination though wasn’t outright, the 1-1 in the results column may indicate it but several racers had their chance to shut down the seemingly unstoppable powerhouse that is currently padding his legacy round after round.

Wienen came out in moto 1 with a poor start as John Natalie secured the holeshot and appeared to be running away with the race. A small mechanical issue soon had Natalie sitting on the sidelines as the rest of the field raced on by. Wienen just kept coming and soon was on the grab bar of Jeff Rastrelli as the pair shadowed each other for a few laps. The pass would come quickly and that was that. The checkers flew and Wienen could stuff another moto win in his pocket and it all seemed like just another moto win that Wienen made look all but effortless.

The parts that killed it for many that have what it takes to give Chad a honest race was simply small issues that forced them off the pace. Josh Creamer always does well at Unadilla and was having a solid race until he cut a tire down. That can happen to anyone at anytime, just something that Creamer would have rather avoided. Joel Hetrick had secured the ATVriders.com Fastest Qualifier award and was another favored rider to do well here at the Home of Horsepower. At some point during the race, Hetrick noticed his ability to steer the quad was going away and forced him to back way off still managing to take a 4th in the moto... Again, another small issues that kept one of the world’s fastest racers off the box. So there were three of the series top riders suffering problems that kept them from keeping Wienen at bay or at least giving him much more of a fight.

Other than seeing our current champion ride to another overall, the biggest news for me was watching Jeffrey Rastrelli hammer out a pair of great moto’s and grab his first Pro podium finish of his career. If you’ve been following our Site Lap and social media, you will know we have been watching Rastrelli’s progress this season and knew it was just a matter of time before his determination and hard work paid off. He could be a big factor in the remaining two rounds as the points battle between Joel Hetrick and Thomas Brown looks to be a tight one as we close in on the last part of the season. With Rastrelli proving he can run in the top three, he may be the rider who makes or breaks that battle that is only 10 points apart. It is going to be very interesting!

Another racer who made their ATVMX Pro class debut was Preston Young. Young came off the gate like a seasoned Pro and ran strong and would find himself leaving with the 10th place position. Hopefully he can get some serious support for next year and become a series regular!

The remaining two rounds should be something to watch. Chad Wienen is fully expected to do what he has done all season and unless something major happens, you should be looking at Championship number three claimed at Redbud. The real story will be the battle behind him as far as the remaining points go so expect some bar banging to go on as riders give it their all to finish strong. Redbud and Loretta Lynn’s both feature soil that may favor Rastrelli so who knows how things may play out!

That’ll do it for now. Till next time, God Bless Your Heart and All Your Vital Organs.