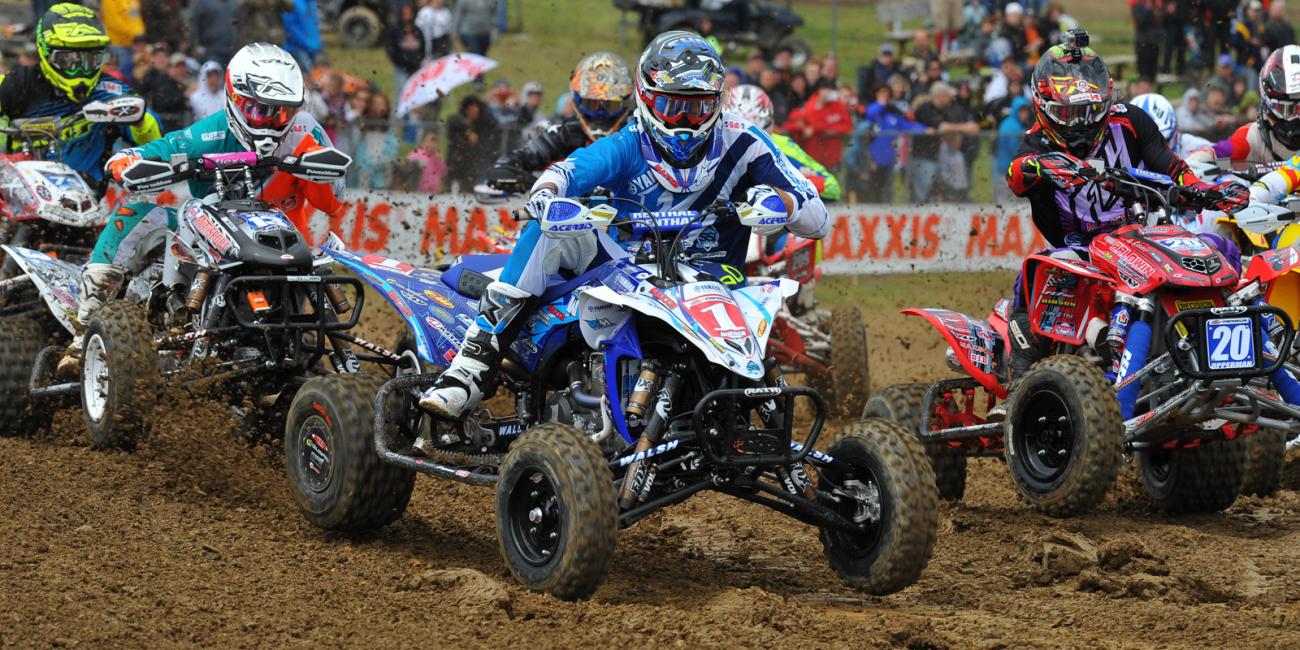 Site Lap: The Pilgrimage to Dilla

Once again the ATV Racin’ Nation makes the pilgrimage to the legendary Unadilla Valley Sports Center and Mother Nature has decided to deal us what appears to be a near perfect weather for the racing weekend. Sunshine and 77 degrees today, mostly sunny and 80 degrees on Saturday and Sunday a chance of rain moves into the region with a high around 75 degrees. I realize Sunday doesn’t look as great as today (Friday) and tomorrow (Saturday) but overall it appears to be a very comfortable forecast.

A look at things from an AMA Pro ATV perspective it looks as though the championship is all but wrapped up for the 2 time, and soon it appears to be 3 time, champion Chad Weinen who currently has a 47 point lead with 3 rounds to go. Saying that may be a little premature with still 3 rounds of racing left before the season is over but the consistency of Weinen in the past few years and more importantly this season leads one to believe short of anything catastrophic happening to his quad in these last 6 motos that he will win the championship.

A lot of eyes will be watching the battle for 2nd spot in the championship as Joel Hetrick and John Natalie sit only 7 points apart, and another 7 points behind Natalie is Thomas Brown. Natalie suffered mechanical issues in Minnesota but vowed to have it sorted it by Unadilla. Hetrick has had to rise above the bad starts and with a lot of heart and perseverance he has been able to position himself in the latter part of the season for a possible run at Wienen in these final rounds. Brown, who also got off to a bad start here in 2014, has been turning things around and is expected to be one of the heavy hitters here this weekend.

Before we look at some other things to watch this weekend I feel we should also be watching a little deeper in the pack of ATV Pros. Former champ Josh Creamer is due for a good ride right about now. Creamer for whatever reason has suffered himself from being taken out, mechanical issues and just bad luck. It has to turn around soon for this rider knowing his history, heart and determination. And one cannot go on without mentioning the remarkable rides as of late by Ronnie Higgerson and Jeffery Rastrelli. Rastrelli has seen more consistent rides up front and even posted the fastest laps of the day at Spring Creek. Higgerson has shown some glimpse of greatness the last few rounds himself and leading the Pro Am point battle, Ronnie is riding on a big wave of confidence that may take him straight to a podium finish before this season is over.

Speaking of Higgerson and Rastrelli and the Pro Am class, Ronnie actually leads the points chase in this one. If you remember this class started out crazy this year and has never really worked in the realm of sane just yet. Each time this class lines up, no one knows what is going to happen. Higgerson has been the only consistent rider in this class and it has helped him secure a 31-point lead heading into the final rounds. The one thing Ronnie and everyone in this class realize is that “it ain’t over” and it probably won’t be until the final checkers fly. A lot will depend on this weekend and Red Bud in two weeks what is going to happen here. In a perfect championship battle from a fans standpoint, hopefully this one goes to the final moto at Dirt Days.

The Pro Am class has had 5 different winners so far this season and Ronnie Higgerson is the only rider winning more than once so far. Ronnie has also finished on the podium at every race in this class this season except for the opening round in Georgia but turned things around at round 2 in Tennessee when he took the win and put together a string of solid rides. Two more riders to watch in this class will be Tyler Hamrick and last race winner Sean Taylor. Taylor by the way took his first ever Pro Am overall at Spring Creek and don’t be surprised if he found that groove he has been looking for. But then again, nothing ever happens the way you expect in this class.

The Pro Am class has also seen its share of injury this season as well. Unfortunately a number of the injuries occurred in Ohio but it has certainly made things interesting in the last half of the season. Cam Covil, Nick Moser and Brett Musick are three of the key players that went out that round and one would think it would make things easier up front but that is not the case. When one falls another steps up in his place and some of the new players toward the end of the season could be riders like Nick Gennusa, Alex Woskob and Cody Jansen. Though Jansen has yet to see a podium, this is the part of the season where Jansen seems to shine brightest and it will be no surprise if we have a seventh winner and if it is the #40.

I know that Unadilla always seems to bring some surprises with different riders showing up that normally don’t or haven’t for a while and this weekend is no different for the Girls class. I read where “Little Lizzy” Elizabeth Voght will be racing this weekend for the first time in nearly two seasons if I am not mistaken. It will be good to see her back mixing it up and hopefully challenging to make it that much more exciting. Who knows what will happen here but it should be fun to watch and fun for Elizabeth.

Realizing there are still three full rounds of racing, I won’t break down the championships just yet in the other classes but one can say these next rounds will be crucial in any championship bid. The early part of the season carried a lot of weight but for some reason this season the last half seems to be the heaviest.

Speaking of heavy, let’s check in with Ken “I may have put a few pounds back on” Hill:

Wow, we are heading to the legendary dirt of Unadilla, which always seems to mark the middle of the summer and the midpoint of the season. If you scroll through the social media sites, you will no doubt see tons of vacation pictures as everyone finds a way to sneak off to the beach or hit Niagara Falls as it is in the same region as the race. Family and friends is what it is all about at the end of the day for most and it is great to see as your exploits are shared.

Now the racing itself at Unadilla is always packed with action, however, the big track tends to spread the racers out and a winner can become clear fairly early in the race. I have a feeling that may change a bit this year as the level of competition and the willingness to push things is at an all time high. The shorter moto time for the Pro class may lead to a Unadilla that will be unlike the previous years and with several riders all fairly equally matched ready to throw down.

Chad Wienen has to be the favored winner coming into this round. He has a streak going not only for closing out the championship but for taking the win here at the “Home of Horsepower” so there really is not much to elaborate on. The big question is, who will show up at Dilla and take Chads thunder away?

That question is not an easy one to answer, Josh Creamer, Thomas Brown and John Natalie as well as Joel Hetrick all stand poised to get on the podium if you take into account their history at this track. Finding the podium won’t be enough to take a win from Wienen though, it will take a few riders to get upfront and keep Chad out of the top 3. That is a tall order to fill in both motos. So we head into this round with some great racing about to take place and all questions will be soon answered!

The Pro AM class should be another heated battle here at Unadilla and the same names should be making a solid run at the podium. Jeffrey Rastrelli has been having some issues and if they have them sorted out I would expect to see him leaving New York with a win. We all can see he has ramped up his program and his skill level and speed are where they need to be to win races. Ronnie Higgerson and Tyler Hamrick are two others that have an honest shot at a win. Both have the speed and power to handle the class and the power robbing hills found here but they are not alone in the list of riders capable of winning. Nick Gennusa could have found the spark he needed to fire up his season along with a host of others so the stage is set for a beast of a race on Sunday.

So there is the run down as I see it, but this is not a real surprise to those keeping tabs on this season. I hope everyone has a great weekend of racing and keep in mind that the big air at Unadilla is unforgiving so be safe!

Thanks Ken! Before we go a little reminder for you from RacedayPix.com who reminds us that if you want a picture plaque for sponsors etc. They are taking orders this weekend and the cost is only $35.00 each with the buy three get the fourth free special applying. After this weekend the cost will be $40.00 and there will be no buy three special. So it sounds to me like you best be ordering.