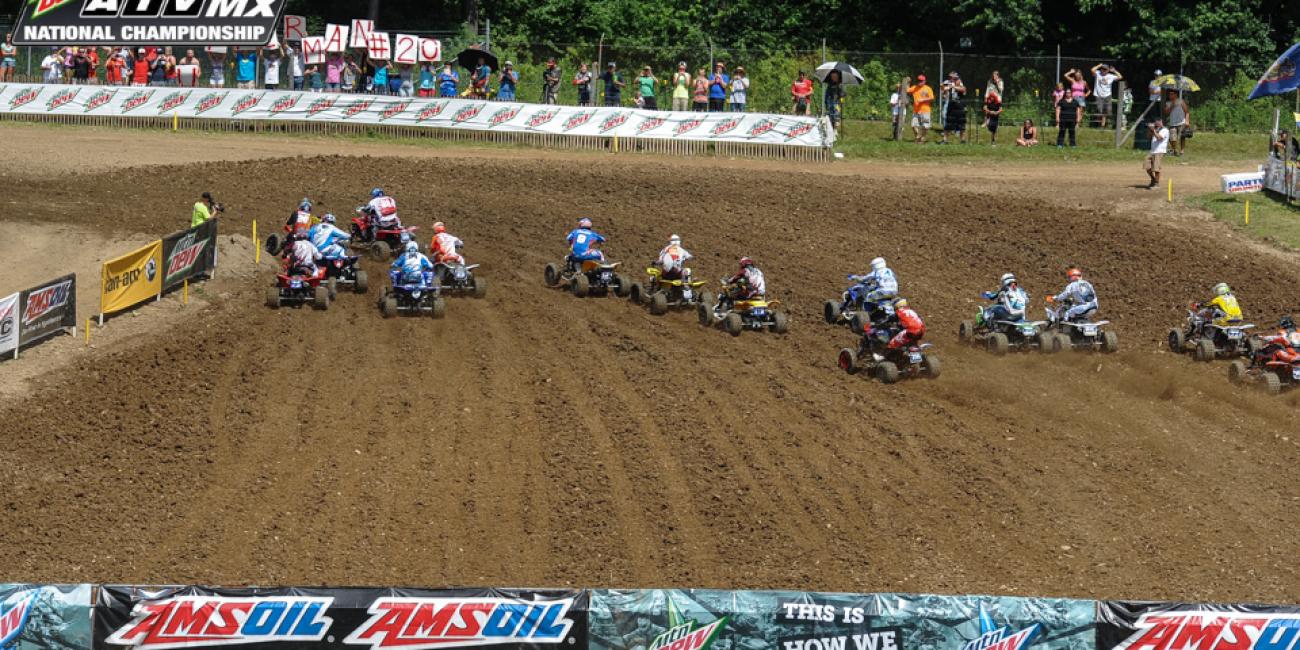 Is that the crackling of the “Crunch Time” I hear as we are now only seven weeks away from the kickoff to the 2014 Mtn. Dew AMA ATV Motocross National Championship. That’s less than two months away and what seemed like ages only a short time ago now seems so very close. The reason for this is because of one simple thing, “It is!”

I am not sure about you but for me this off-season has been extremely busy. I have been several places and had a lot on my plate as far life goes. I am by no means complaining but just amazed at just how time does fly. I try to keep an eye on the happenings around the ATV Racin’ Nation and at least have an idea of what’s up. This year has seemed even more challenging than years past to keep up and I have just about decided as far as social media goes, Facebook is taking a back seat to this thing called “Tweeter” or “Spitter” or “Twitter”…. yeah that’s it “Twitter!” It kind of brings a whole new meaning to “A little birdie told me.” But anyway I haven’t been “Tweeting” a lot lately but I am sure now that I figured this out I will be doing a little more “Bird Watching” in the future.

To the juice! I personally haven’t caught up with 2 Time and Defending AMA Pro ATV MX Champ Chad Wienen yet but by the looks of things he is as busy as ever. It appears he has been spending more time with the GNCC Champ Chris Borich as well as other GNCCer’s like Johnny “G” Gallagher, Landon Wolfe and Gabe Phillips. The Champs were putting in some “psycho laps” from what I understand.

I got a report from top GNCC Girls racer Bee Parks and her younger brother Jackson that they were putting some laps in with “The Champs” at a “Top Secret Facility” somewhere in Florida. I am not too sure but that sounds pretty cool to say regardless of how official that statement is. As well it would be a great experience to get to be on the same track as your heroes. The funny thing is I think back to 2005 in Decatur, Texas as a young privateer Chad Weinen pounded the whoops with the best of them till he was left sitting trackside for asking more than his underprepared machine could take. It is amazing what hard work and determination will bring. So don’t let it be said that you can’t do it because Chad is living proof. Heck only a few years ago we wondered if Chad would ever be able to race again and he won the championship a year later. That’s a Hero!

I spoke with Australian ATV motocrosser Jordan Dummett who is busy working in what sounds like the middle of nowhere Australia.  Jordan tells me “I am working away in the middle of western Australia on the Mines doing fixed plant maintenance at an iron ore mine.”  He also said that he landed in his home country about 5 months ago after the season and has been on the road working for about 4 and a half of those on the road. He actually said he could use the rest to let his body heal after the season in 2013. Dummett said “I still have everything over there waiting to come back to! All I bought home was my practice machine. I'll be at Lorretas Lynn’s Dirt Days for sure!”

Let’s check in with Ken Hill to see what’s been happening from his little corner of the “Nation”:

We had another meeting regarding our new social media push for the upcoming season and man do these guys push hard on getting things done! There is no cool news to really share about, just behind the scenes organization and more planning however it should bring the series more in line with the big boys as far as appearance and flow. Being that this is computer stuff I feel like an alien when they get to talk all this high tech mumbo-jumbo but I will be ready for it comes round 1. Twitter and Instagram accounts for the series will be getting some tweaks so make sure to follow the series on those accounts.

I was able to see Ronnie Higgerson's beard as he posted it to his Facebook page, which now has him official enrolled in 2 Lumberjack unions. Holy hair batman! Josh Creamer usually sports some serious chin hair but Higgerson has him beat, and I'm talking Duck Dynasty beat! My advice, find out what razors he uses and buy stock in them once he starts trying shave that off! All in good fun, we always enjoy Ronnie's good nature and his openness to take one for the team. At the present time, Ronnie and Josh Creamer are at Keith Little's compound training and Ronnie's said they would be more than ready for the first gate drop.

Well, I will keep it short due to having to bring more firewood in so we do not freeze to death. Round one is fast approaching and people are getting restless with me being at the front of the list. The final approach to 2014 is in sight and soon we can all look forward to better weather and warmer temps and ATV Motocross action!

Thanks Ken and wow…I didn’t recognize Ronnie at all when I saw that pic. And now it’s on to other news from the ATV MX world.

Congratulations to former Pro ATV racer John Ragon and his family for the new addition. John is the proud father of a beautiful baby girl named Berkley Grace Ragon. I know these are special times and who knows maybe little Berkley may grace us with her presence at Mtn. Dew AMA ATV National.

I spoke with Casey Greek top industry mechanic for top up and coming ATV star Lane “The Dude” Baird and asked him to send an update on what’s been going on there. Here is what he had to say…. and looks as though his wife hasn’t been letting him speak much lately and/or he is ready for a new season.

Hey Hot Rod! It’s Casey Greek checking in for the Bill Baird motorsports crew. As for me I’ve been crazy busy trying to remodel my house. Kristy and I bought a house about a month ago. So as soon as I got home from Christmas vacation in California it’s been wide open with the remodel. Kristy and I are expecting our baby girl may 3rd 2014.

Between remodeling and baby shopping, I have been racing with Lane as much as possible we have hit almost ever-indoor race in our area. Lane is riding a 90 really well as we plan on running the 70 Shifter Class and the 90 Jr Shifter Class. So with the jump to the 90 we have been trying to get as much seat time as we can. We have plans to head down to Durham town at the beginning of March to get some time on an outdoor track. Lane is getting anxious to get back to the nationals. Although he has been busy with racing RC cars he will race RC cars Friday night then go straight to the track and race his quad Saturday night.

It’s been a busy off-season we are building all sorts of new aftermarket products for the Cobra at the shop. So life never slows down in Kentucky. We can’t wait to see everyone and a few weeks and get back to the racing family. Let’s just all hope the rain stays away. Smitty needs to be nice this year!

Thanks Casey and yes I agree Smitty needs to bring the sun this season like he would always bring a laugh after the jokes he pulled!

Also I understand that 5 positions have been added to an already filled school in Ohio. So if you missed it here is the information. It sounds like it should be a great time and I know the Ohio Crew will make things top notch.

Want to ride with the pros? Only 30 spots are available! The Ohio Crew & Briarcliff are hosting a riding school with Josh Upperman, Tim Dettling, & Tyler Hamrick. It takes place at Briarcliff MX, May 11 2014 9am-1pm. All riding levels welcome; A, B, C, & Mini Riders. Reserve your spot today!! Email [email protected] or call Brittany Gabalski at 330-988-6176.