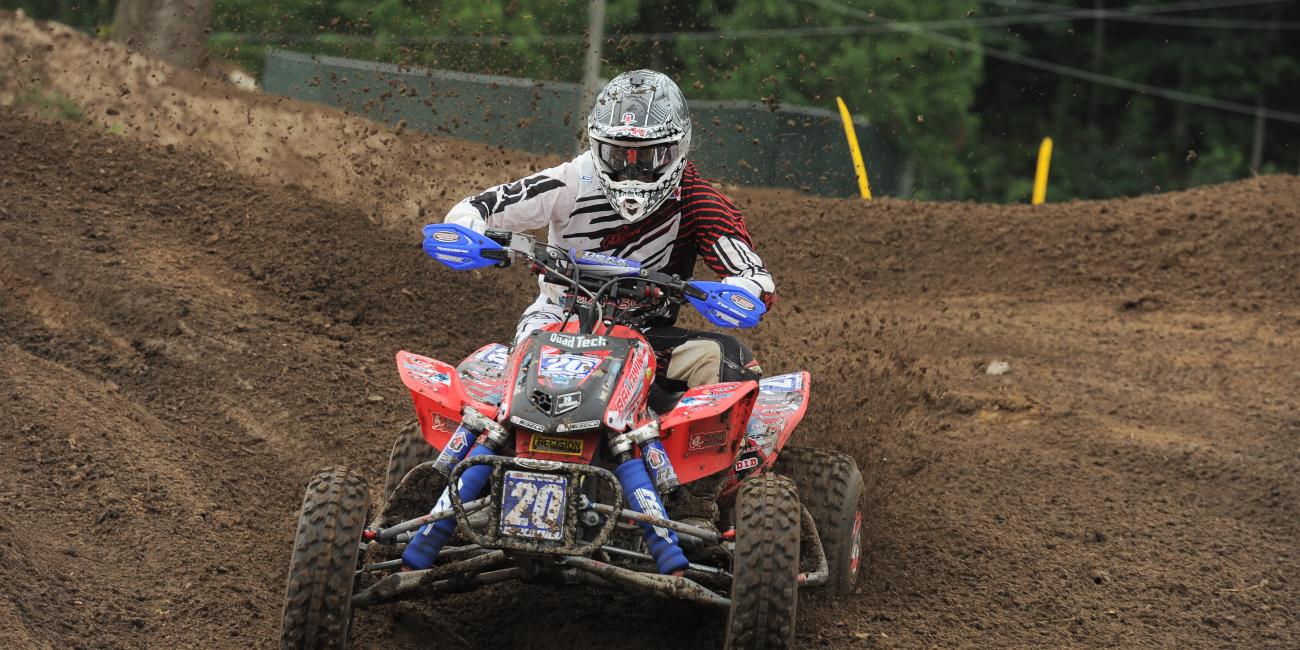 Welcome to Site Lap #1 for 2014 and let me say one more time, “Happy New Year!” The Holiday Season is always a great time of year. We have a chance to pause from the grind and get back to our own personal grassroots, the part that really makes us who and what we are. It is a time of reflection before we put it all to rest and look forward to the newness to follow. And before we move on we can say “so long” to a rather fruitful year.

I know looking back it seems to be marred so much by all the rain that fell upon us in 2013. If nothing else it gave us a chance to look at our own character. Some programs were made and dreams were filled while others had dreams broken and programs in ruins. Though the negatives are always a part of life, there seemed to be more positives and those that were able to weather the storm came out a little better from it. One thing stood clear no matter what happened last season, the heart of the ATV Racin’ Nation is strong. Though there were many obstacles along the way, there were many triumphs that came from them, and all in all we had a safe and prosperous year. The rider numbers were not the best in history as far as participation is concerned but they were strong. The sponsorship dollars were a little tighter than before but riders pushed through. The weather was not the most favorable at times but the “Nation” held firm and amongst any and all adversity, made it through possibly a little better people when it was all over.

The end of the season for many meant the beginning of a new one almost immediately. In the early part of “Silly Season” there was a lot of news. It then seemed to wane a little before folks started popping up again and many ready and waiting for 2014. Many race bikes are done. Many are training and riding relentlessly down south right now, and most of us cannot wait to get things rolling the last weekend of March at Aonia Pass near Washington, Georgia.

I have received a few notes from folks giving us some idea of what is happening. The first comes from Girls Class Champion, Maddie Guyer. Maddie has big plans as far as racing is concerned and is going to be one to watch in the Youth division in 2014. Maddie is part of a great team that seems to get better all the time. I got this note from her in between training sessions:

“Hope your holidays were good and you're looking forward to the 2014 racing season as much as the JB/Cheerwine team is! We just got home from riding down south. Brogan & I met up with a few of our teammates Grayson Eller & Duck Lloyd. We started in Florida then went up to Aonia Pass for a day then headed to North Carolina.

I'm excited for the 2014 race season, the JB/Cheerwine team will still consist of: Brogan Guyer, Tyler Peters, Grayson Eller, Blake Sarver, Duck Lloyd, Jeffrey Rastrelli and our newest rider Joel Hetrick! The team is very excited and looking forward to having Joel under our tent this year.

Thanks Maddie! It sounds like things are certainly going well for the JB/Cheerwine Race team and looks like there could be several championships out of that camp this season.

I also got word from the Women’s Class Champ, Katie Mette. Katie is busy, busy, busy but still as determined as ever. Here is what she had to say:

“Things are going good here. Our winter rebuilds are underway and I am excited to get back to riding again. I hope to make it down south a few times throughout this winter but with school I won’t be able to stay long. We are still working on getting sponsorships together and deciding what exactly we will be running but I will definitely be back for 2014. See you in March!”

Thanks Katie! Surprisingly she is still putting her program together and you know it has to be tough to go to college and be a successful national champion. It is good to see that Katie is looking ahead for her future past racing.

Another rider I heard from this week was JR Hinds. JR is a rider that has been around for a while and made his mark on and off the track as an all-around great guy. JR is also known as an avid ATV FMX rider and has taken a quad to limits that many will never know. JR spent a lot of time racing the nationals this season but by the looks of things, there could be a little shift in his program where he is going to try and make a little money and a name for himself in the ATV world. I got this note from his this week:

“I thought I would send you an update and let you know how things are going in my world. Since Caleb Moore’s memorial race I have been hiding out for the most part. I went to Argentina to race and hang out with Nico Cavi. I had a great time down there. Hopefully I will be able to go back in February.

I still have no real game plan for 2014 other than try to keep riding. I won't be able to run the nationals this year unfortunately because of how costly it is for a full season. So to keep my dreams alive I will be making FMX my priority in 2014. I am coming up on 27 years old this year, it's time to make or break.”

Thanks for the update JR! I do hate to hear that he won’t be able to run the nationals this year but maybe things will change and he will be able to do both. If nothing else, maybe we can see a show at a race some time.

Before things get way out of hand, let’s check in with the great Ken Hill:

Rodney, a quick update on things from my side. I am proud to announce that Digital Dave from RacedayPix (www.racedaypix.com) is going to offer up a prize per round in conjunction with the ATV Motocross Facebook page. We haven't nailed down every detail but hey, who wouldn't want to walk away with a free print from the weekend! David Smith has always been a big supporter of having a good time so we are going to try and have some fun with the contests.  We are also working on contacting others to see if they want to get onboard with some goodies for not only the racers, but for the fans that follow the series as well.   I was able to get some info from the Ohio crew as they prepare for another exciting season in the motocross world.

"Hey Ken, Brittany here checking in from the Ohio Crew. A lot of people are asking what's going on with us for 2014. So I thought I'd let you know first!

Recapping on 2013 wasn't as amazing as 2012 season with 6 championships. We lost a lot of good riders between 2012-2013: Rachel Dickson, Maci Devenport, Scottie Vechrey, Mike Sheldon and Larry Miner. After the start of 2013 we lost a few more riders due to injuries and conflicting schedules, etc.

The riders left though never seized to amaze me. Tyler Hamrick had the biggest accomplishment finishing 10th his first year in Pro and taking home Rookie of the Year. This guy is always amazing to watch race, he really puts 110% into it. We are very pleased that Vechrey Racing has signed him for 2014. Josh Upperman took home a 6th place in Pro. Greg Filliez had a good season before being injured. He made the podium a few times finishing 2nd in 450 A and 5th in Production A.  Greg says "I've been working out as much as possible, riding indoors, and am planning to go to North Carolina before Nationals start again." I think he's going to be a good one to watch for in 2014.

Luke Shepherd finished 4th in 4 Stroke A and got his toes wet in Pro Am. Dan Hoisington who has also joined up with Vechrey racing says "I've joined a cross fit center to get in shape and have been riding Ram Jam every Sunday as well. This year I also am riding for Vechrey Racing team which I'm very excited about".

Ries Parvin is going to GNCC for 2014, and Brandon Robinson, who is taking some time off in 2014 to be a new daddy to Baby Boy Ryder, weren't able to put in a full season but always gave 100%. I'd really like to thank our sponsors from 2013; Never Sleep Designs, Weekend Warrior Motorsports, 488 Web Design, Ohio Action Photo, Extreme Tec, SSI, 330 Motorsports, Route 62 Mx and Wheelz Up.

In 2013, as some of you know, we held a benefit/quad only day for Tim Dettling. It was a huge success. We cannot thank everyone who helped and attended enough. Special thanks to Jeremy Osborn at Briarcliff Mx, the whole Vechrey Racing Crew, Joe Miller, Extreme Tec, SSI, ATV Fourplay, JR Hinds, Number 1 Atv, Ohio Action Photos, FourWex Carbon, 330 Motorsports, and Dohms Cycles.

For 2014 we have decided to stop the team aspect of the Ohio Crew and focus on helping the whole sport of ATV racing in Ohio. We are going to put on riding schools, quad only events, and even put up money quad purses for some OMA events. We also are putting all our efforts into helping make the Ohio National at Briarcliff a huge success.

Our first event is still in the works, but I can say we have a date. Ohio Crew Fest 2014 will be May 10, 2014 at Briarcliff Mx. It will be a great opportunity for people to check out the track to its National Level. Again, huge thanks to Jeremy Osborn at Briarcliff for letting this happen. More details coming soon! Be sure to like us on Facebook or Email us anytime at [email protected]. I hope everyone is excited for 2014 as I am!"

We wish those guys and gals the best of success in 2014 and look forward to catching up with them at the Briarcliff round!

Thanks to Ken and everyone else for their contributions this week and till next time, God Bless Your Heart and All Your Vital Organs.