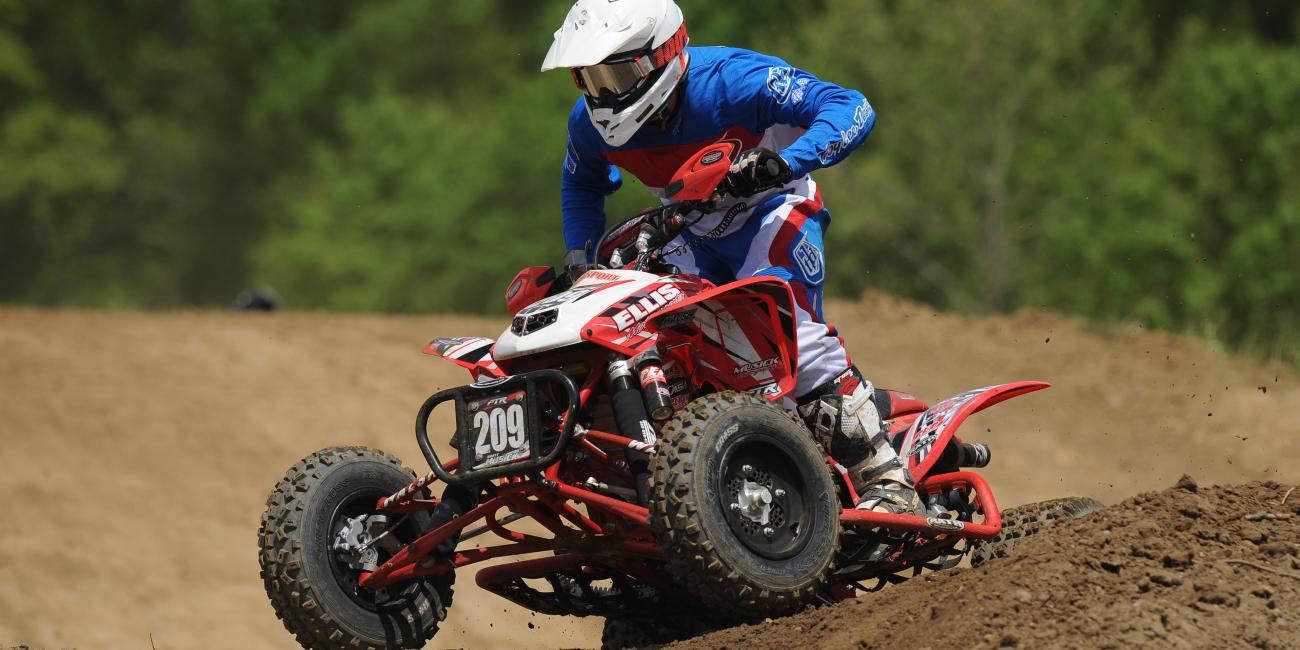 It is hard to believe another calendar year is nearly in the history books and it seems like only a few weeks ago this year was just beginning. One can surely say that this has certainly been a rather monumental year on and off the track for many of the ATV Racin’ Nation. While many New Year resolutions are still being conceived many are already set in motion and high hopes for what’s to come are huge.

In recent weeks we have talked about the great expectations of a new season and though things have quieted down the last couple, this week the flood gates are starting to open and the silence is broken. I received a few notes with updates this week and even talked a little with some.

Even though the first person I speak of this week doesn’t have any interest invested in the upcoming season (no indications as of yet anyway) he had some rather interesting points to make about some of the changes that are scheduled to take place in 2014.  The person of which I speak is former Pro-Am champ Cody Gibson.

There have some rumblings lately on a few media sites posing the question of whether or not Cody Gibson will make a return to the AMA ATV Motocross Nationals in 2014 and before things get out of context here, let me say this. According to Cody, he has no plans to return to racing in 2014. It isn’t necessarily that he doesn’t want to but it's more of a logistical and financial matter. Cody said the new AMA Pro ATV format was very appealing to him with the races now going to be 15 minutes plus rather than 20 minutes plus. He said, “well, for one I think the 15 minutes plus 2 is great for guys like me that have speed and talent but not enough money. I would honestly come back now if I could afford to miss work. I think it will give the riders coming up the ranks more self-confidence about going into the pro class. At least until all the big sponsors come back anyway.” All I can say to that is that he has a very valid point and I too feel that it will make for more exciting finishes. The last five minutes of the race always had little change anyway and now the guy’s can and will fight harder the entire moto. There will be, in my opinion, tighter and more exciting racing that comes down to the wire. Kind of like what we have seen in Pro Am. If nothing else, I am excited to see it happen to see just exactly what it does bring to the table. Who knows? It could make for an even better and more exciting championship. Only time will tell.

Another rider that may be excited about the AMA Pro ATV format change is the young Brett Musick. Brett is down south training right now with some other fast guys. It seems that Musick is pretty fired up already for next season and cannot wait to get it rolling. Brett sent me this note to let us know how things are going and it’s looking really good once again for him in 2014.

“Hey Rodney! Just wanted to let you know how things are going and what’s up with our program right now. Currently I am in North Carolina at Hog Heaven MX. Everyone really needs to come try this track out. It is definitely the best track I have ever ridden. I came down here with Alec Miller and Scott Ellis. Alec and Scott are both getting a lot faster and I can’t wait to see how they do next year. Tyler Hamrick and Tim Dettling came down last night so I’ll be riding with them this weekend. We have been here the past 4 weekends and I have been riding as much as I can recently. As for next season I will be on a Honda in the Pro and Pro-am classes. I hope I have another good year and I am pretty excited for the season to get started. As far as sponsors for 2014, I’ll be riding for Scott Ellis again. I can't thank him enough for all he does. Also I have been working on a lot of little things with the quad and it has really helped a lot.”

That is so cool to know and one has to think all of the sudden the Pro class may be as exciting if not even more than ever before. It was also good to know that Tim Dettling is ready to get back at it. Remember Tim had a great thing going winning in the Pro-Am class before his season ending injury.

Speaking of exciting. I spoke with Duck Lloyd who is always excited and even more now than ever. Duck has been off the quad since just before Unadilla this past season. Duck was injured only a day or so before the race weekend and has been off the quad since. To put it bluntly Duck is “chomping at the bit” (if a duck can do that?) and ready to get things going for 2014. Duck said he is currently at the JB Racing HQ picking up the new equipment for next season. He said “I'm all healed up I'm going to come out stronger this year and I am going to train harder this year than ever. I've been off so long because of injury I'm chomping at the bit to race.”

I also caught up with Ronnie Higgerson who is too excited to get a season underway more than ever before. Ronnie said his training starts bright and early on Monday. He is hitting it hard and getting back into the routine for a month, before he leaves for Florida to meet up with former AMA ATV MX Champ Josh Creamer to start testing their race bikes for the upcoming season. Without a doubt I feel this combination will work for both these guys. Ronnie may provide that little spark of fun for the team that Josh may just need to be back on top all the time.

It looks like Sean Taylor is busy prepping for the new season as well. Sean really started to shine the last couple of seasons and may need to wear his shades a little darker in 2014 because his future looks so bright (couldn’t resist that comment). Sean tells me there is nothing too crazy going on right now, and says he is resigning with the whole Root River team, as well as adding a couple more personal sponsors to his program. He says he will be working with Corrosion Specialties and Brownells Inc. (Which is largest gun parts distributor in the world…. could this mean he will be an even bigger gun in 2014 with even more ammo… couldn’t resist again.)  Sean also said “I have been spending time with our new addition to the family and that would be our baby Rowyn. She was born in October which was why I was not at the Pro Challenge.” He said that he plans to head to Texas in a couple weeks to train with Joel Hetrick and the rest of the Root River team to get ready for the 2014 season.

Speaking of Texas, I spoke with the Ford Brothers camp this week. Youth riders and brothers Cody and Bryce Ford have been forces to reckon within the Youth division and it looks like 2014 will be no different. According to their momma, “the Ford Brothers are excited about training for the 2014 season.” She also said, “The training will begin THIS WEEK! As a family we've decided to leave the suburbs of Dallas and move to a little bit bigger piece of land. We're dubbing it Green Acres since we're mostly city people moving to the country life. The boys will have more room to ride and be outdoors. Cody will race the Schoolboy Jr and Super Mini classes this coming season. However, Bryce has many choices at his age and just can't make up his mind. He really enjoyed racing against the very fast Gunner at the end of the season and wants to get on modified shifters. But, we're not exactly sure how that works in the fleet of quads we have right now. We have a few short months (weeks) to get it all worked out so that we're ready when the gate drops. But is a racer ever really ready when the gate drops?”  It sounds like things are going to be in the Youth classes this year and I can’t wait to hear more from others in the future.

As I look through all the information written this week I am rather amazed at how much is starting to happen. The funny thing is that I have more but will save it for the coming weeks.

Before we go let’s check in with Ken Hill to see how things are going there:

Rodney, the news was let out yesterday about the new network, MAVTV, and I am pretty stoked. From what I gather, they are going to try and air the ATV show around the Live Moto 1 Pro Bike national, which should have a huge following!  This is a pretty solid step towards giving Pro ATV Motocross a leg up with regards to exposing their incredible talent to the world. The behind the scenes changes for 2014 are just beginning and we all hope to see success. We will be monitoring how things go, and see what we need to tweak and change along the way. Kudos to those doing the brainstorming to make this happen!   I am still working hard at developing the social media side and have already started seeing riders and teams submit content for the ATV Motocross webpage www.atvmotocross.com.  Please keep sending in the info, reports and general ideas because no one alone is going to take us to that next level. Please keep sharing the information and help us help you!

Again, keeping this fairly short so that you can get busy on the builds and ready for training, the 2014 Mtn. Dew ATV Motocross season is screaming at us and there is no stopping it!

That is huge about MAVTV and to me another positive point to the AMA Pro ATV format changes. The racing should make for better TV coverage for everyone. Is it a sign of bigger and brighter things for ATV MX. Looks like we all may need a new pair of shades for the bright future of ATV MX.

That’ll do it for now. Till next time, God Bless Your Heart and And All Your Vital Organs.