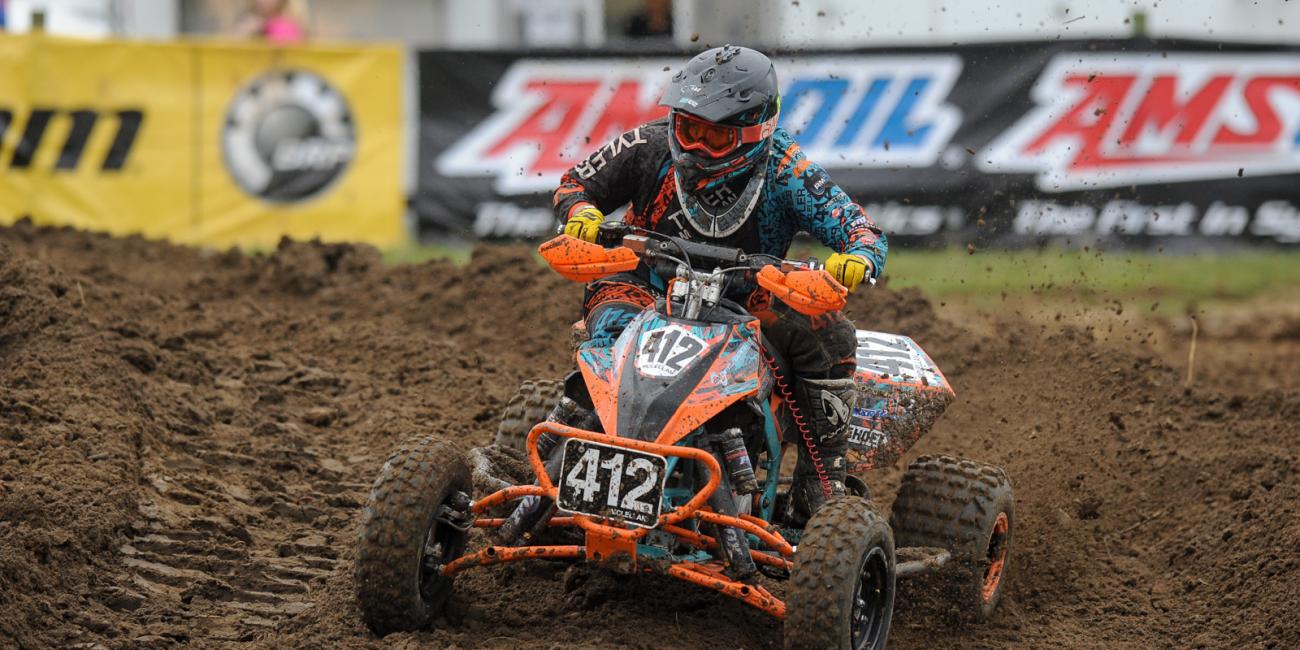 Catching up with the McLellan's

For the McLellan family, racing in the Mtn. Dew ATV MX Nationals is a journey each and every round that has a few differences than those of us in the lower 48! We caught up with the McLellan’s to see how they manage the trip from Canada and how they did during the 2013 season.

Traveling to the follow the series from Canada is impressive, where exactly is it that your family lives?

We live on a small 12.5-acre hobby farm just south of Roseneath, Ontario that is about a 90-minute drive east, north east of Toronto Ontario Canada [18km north of Cobourg Ontario]. We have a small practice track on our property, which we built approximately 7 years ago. We are looking to upgrade the track [larger, widening and addition of large jumps] in 2014; however, we must pass many of the same hurdles you experience in the USA [municipal restrictions such as noise, dust, hours, numbers and frequency]. This is a go pro video of our track: http://www.youtube.com/watch?v=iMBemQbXcjk

You guys made every round, that’s awesome! Describe some of the issues you face driving from Canada for each round?

We headed out to Durhamtown in early March of 2013 to get some seat time prior to the first race of the season at Aonia Pass. Our 2007 Dodge 3500 hauls a 47’ toy hauler 5th wheel. Our family of six [Suzy 7, William 10, John 15 and Tyler 17] all made the 23.5-hour drive through ice, snow and rain. We had a rather crowded truck and fifth-wheel, considering we travelled with three 450 KTM’s and another in spare parts, six pedal bikes, four dirt bikes, a tricycle, and enough clothing for three weeks. As we are not allowed to cross the Canada / USA border with meat, veggies or fruit we always had to plan to make time for shopping on each and every trip. Our shortest trip was Unadilla which is only 5.5 hours however, most others were in excess of 12 hours when you figured in border crossings, traffic, weather, detours, gas and food stops. I would exclusively do the driving as my wife stayed home from all but four of the races with our two younger special needs children, while the older boys raced. Throughout the season we ran into various problems: first in the flywheel on the truck on the way home from Wildcat Creek and limped home to a repair only to have to fully replace the transmission after getting home from Sunset Ridge and then only an hour from the border after leaving Birch Creek we hit a deer, which did extensive damage to the front end of our truck and the trailer as it travelled under the vehicle and the truck. Twice, we ran into multi-hour detours due to traffic accidents, plus we had the usual assortment of delays due to construction.

Since most of the trips required us to leave on Wednesday to arrive on Thursday, we realized that we would have to figure a way to get the boys schoolwork and my work [I work mostly from a computer] done while we were travelling. We purchased a couple USA phones with an Internet package so the boys could hotspot them to their tablets so and do the schoolwork provided in advance by their teachers while in transit. I would get up a couple hours earlier than the boys every morning to review and respond to client emails and then do the same at the end of day to keep in touch with my clients. Between school work, work, driving, shopping, setting up at the campsites, getting registered and checking our quads over we were kept pretty busy. Add to that I tried the best I could as well to shoot all of the C classes on a regular basis [as well as any of the attending Canadian racers] and art Red Bud, in the absence of Digital Dave, shot every class and every race with a friend [Tanya Groves] so that all racers would have images from the weekend. Other out of the ordinary situations we ran into was having to have specialized out-of-country sports insurance, trying to gauge when we would arrive at a track accurately so we wouldn’t be stuck in the inevitable multi-hour line up at the gates to get in after long and tedious drives. There was NOT one entire race weekend that our son Tyler did not race in the rain… his classes were either first or second in the morning and again one of the last to race at the end of the day. His third class was usually spaced only a few races between one of his other classes so if there were any adjustments or problems we depended on friends to help us get to the gate on time. On a couple occasions we simply did not make it, which is a huge disappointment after travelling for so long to compete.

There were also special positive moments in the year for John and Tyler such as meeting Joel Hetrick and getting race tips from him at Durhamtown and getting to know Joel and John Natalie [their two favourite riders] better throughout the year. They also got the chance to ride and be instructed by Joel Hetrick, John Natalie, Chad Wienen, Josh Upperman, Thomas Brown etc. at Dream Camp, which they took in between Steel City and Unadilla. John Natalie made a big impression on our entire family after meeting our special needs 11-year-old son William at Dream Camp. He went out of his way to take the time to chat with him, autograph souvenirs and even make a surprise “out of the blue” visit to our vehicle to visit and high five him at a gas stop the day we were travelling to Unadilla from Dream Camp at Breezewood Proving Grounds in Pennsylvania. We also became friends with many of the families the boys raced with and to date have maintained the friendships. A good example of the relationships, which were built, was that even though we were not using “All 4 Racing” products exclusively throughout the season [Bill and Chad Reed] they provided assistance to the boys at the gates, with repairs and racing tips and friendship to John and Tyler throughout the year.

What are your racers names and what classes do they compete in?

John McLellan #219 [turned 16 September 21, 2013: competed in Production C class. Tyler McLellan #412 [turned 18, December 4, 2013: competed in Open C, 4 Stroke C and 450C but also raced in some Production C classes. He felt that because he travelled so far he wanted as much seat time as possible. Prior to 2013, Tyler had only ever raced at one AMA track [Unadilla] so attending all 9 other tracks was a first time experience.

How did they do during the season?

John had a 6th place overall weekend finish at Birch Creek. For the year John was 11th in Production C.

For the year Tyler was 5th in Open C and 6th in 450C and 6th in 4 Stroke C. Five times in 2013 Tyler took the Holeshot [i.e. http://www.youtube.com/watch?v=cCorJlrEL3A]only to be passed at a later point in the race. He had a very bad year with crashes [which we wrote off to having little or no practise time at all of these new tracks and having equipment failures:  flat tire, broken battery terminal, broken shock, broken nerf, hand grip came off, etc. There were a number of individual races where he was top five but his best was holeshot and 2nd in the second moto of 450C at Muddy Creek.

What quad(s) are they competing on?

They both race KTM 450sx with Baldwin engines.  Two quads have Fox shocks and the third runs PEP’s. We run DWT tires on all quads.

There have to be some sponsors you'd like to mention that help get your family not only into the USA but also make it possible to hit every round?

It is important to note that all of these sponsors are providing product or discounted product for four quads and or financial support for two riders. Without the support of all of them it would be very difficult financially to get things done. The Canadian sponsors are well aware they will get little recognition as most of our racing is done in the USA.   In return we post thousands of photos to our Sunhill Racing ATV [Face Book fan page ATV’s only] and Sunhill Racing Face Book page [ATV’s and Dirt Bikes] and occasional videos to our Sunhill Racing You tube channel and make them available free of charge to all racers.

Thank you so much for filling us in on a different view on racing the series and best of luck to you all in 2014!