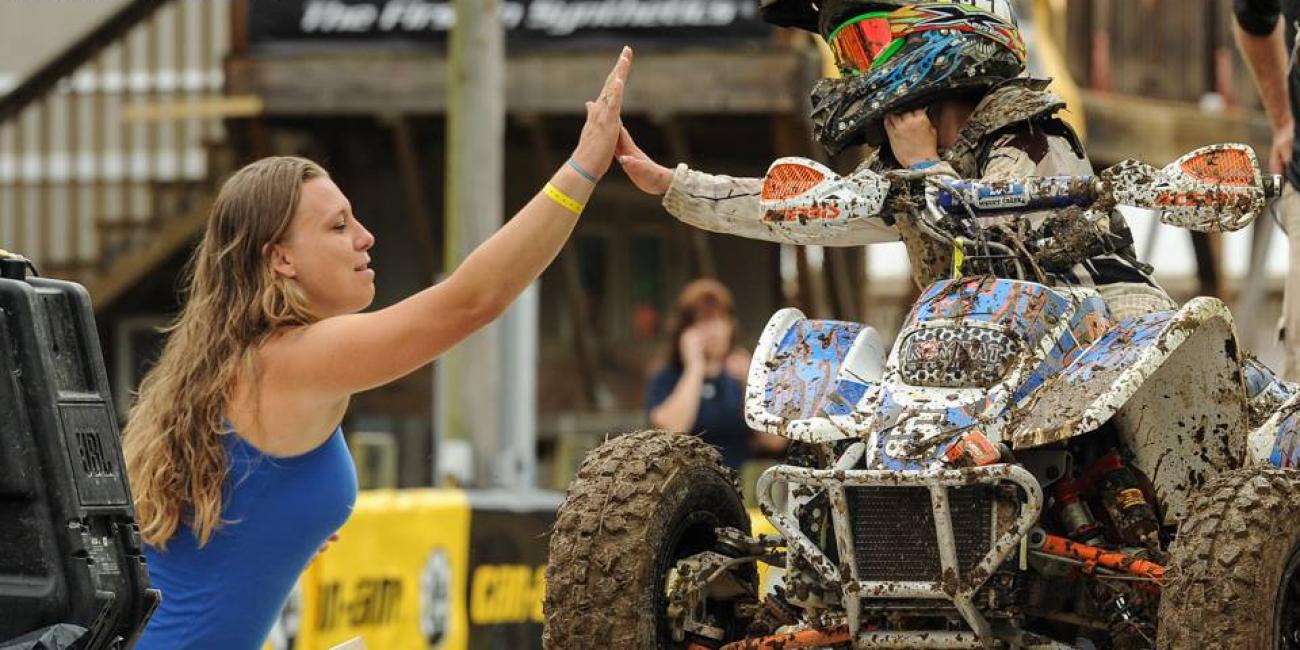 The 2013 Mtn. Dew AMA ATV Motocross Nationals Championship officially concludes this weekend with the annual awards banquet. Though racing has been over for a few months, the time to celebrate with the ATV Racin’ Nation comes this weekend. Deemed the “Night of Champions” top ten riders from all classes will be recognized for their accomplishments.

Anyone who attended the championship season knows every rider deserves credit for this season. As far as memory goes it has to be one of the most challenging seasons to date. I realize that each season and championship is stacked with some amazing challenges but this season there were the normal challenges of competition plus the challenges from Mother Nature. The rain may have played the biggest spoiler for most than any other element this season. Some it weighed in good for while others were left scratching their heads in amazement of one mechanical failure after another due to the wet conditions. The true champions this season has to be anyone that supported a rider’s effort this season as they know first-hand the costs physically, mentally, emotionally and monetarily. To say the least, it wasn’t cheap.

As everyone knows how the top ten finished this season there should be no surprises but as far as specialty awards go, there are a number of anxieties as far as who is rider of the year or who is team of the year and so forth. I will say that I absolutely have no ideas who will get what but all I know is that everyone deserves recognition this season for all the efforts that were afforded by each rider just trying to make this as great of a season as possible.

The following is a list of all the specialty awards to be given out this season. And once again there are a number of individuals and teams that could be honored with each one of these awards but that is what makes it so special when you do win.

If you know Todd Swiegart from ATVUnderground.com then you may have heard him talking about some specialty awards they were working on and they will be honoring some riders efforts this season as well. It is a great addition to the awards presentation and anyone that knows Todd knows how passionate he is about seeing our sport grow to greater things. Actually, maybe he too deserves an award for all the work he does for ATV racing. Thanks ATVUnderground.com for shedding a different light on the lives of these riders.

Regardless how it all ends and who gets what at the end of the night know one thing, everyone deserves a pat on the back and a sincere thank you for making this a memorable and wonderful season. Who among us will be back in 2014 and who may have reached the end of a road? Those questions and more answered in the coming months as we say goodbye to the old and welcome what lies ahead.

Those of you that will be there this weekend, plan to stick around after the dinner and awards as the ATV Racin’ Nation will groove to the tunes of Eddy Lojak as he will party us out of the 2013 season. It should be a great time. Bring your dancing shoes and positive attitudes as this will be a great night to cut loose and make some great memories.

That’s it for now. Till next time, God Ble