There was a lot going on during ATV Dirt Days, but the big headline was Krista Marie’s break out performance on the Loretta Lynn stage. While the concert was a huge success, the story of how Krista was able to even able perform at all is quite astonishing. Just a month prior, Marie was involved in a crash while racing at Muddy Creek in Blountville, Tenn. She sustained several broken bones, including a broken femur, and was hospitalized for over a week. Many told her she wouldn't be able to heal in time for her show at ATV Dirt Days, but her love of the sport and deep will to perform in front of her ATV family fueled her recovery. She wears No. 99 on the track and on the stage. She is arguably the strongest ambassador to the sport of ATV racing. We caught up with her today to talk about her amazing year.

You had attended every round until disaster struck at Muddy Creek. Talk to us about the crash.

I was riding with a jammed wrist and made a little mistake on a jump. I landed wrong and my foot went through my nerf bar and sent me rolling. I think I broke my femur when my foot jammed down the first time, but the quad just chased me down and attacked me. When the crash was finally over, I had four broken ribs, four broken lower vertebrae, my wrist was broken, as well as my collarbone, and I lacerated my liver. It was quite an experience and I don’t want to go through that again!

At that point the concert must have seemed out of the question, right?

Everybody was telling me that we had to cancel the concert. They were like, “What are you going to do, use a walker to get up on stage?” But, I just told them to please not cancel it. It would just be terrible for me if they canceled it. Then, my management team just told me they would continue as planned so I just focused on my therapy and worked out hard. I think it (the concert) was the reason I was able to heal so quickly.

I mean, it really helped with my physical therapy. When you have a reason to get out of bed in the morning each day it really helps, you know? The ATV community is my family and all I could think about was getting better so I could get back to them. The doctors were impressed; they didn’t expect me to bounce back so quickly, but I just wanted to make that show so badly.

Your music career is taking off. If you get signed to a big record deal are you still going to race ATVs?

Absolutely. Will I be able to do it on a full national scale? I doubt that, but I’ll be hit and miss and choosing certain events I want race at. I won’t be able to be as competitive as I’d like to be. You know, girls like Michele (Natalie) and Heather (Byrd), they are out there riding and training everyday and I won’t be able to do that. But I’ll still be racing. I’ll never be completely away from the sport. I love it so much. It’s a big part of my life. Also, I want to stay involved and do everything I can to help it grow.

And who knows? If I decide to settle down and get married and have a family I want my kids racing in the motocross world.

It's obvious that the ATV community is very dear to you. What was it like to perform in front of all of them on Loretta Lynn’s stage? Well, of course I enjoyed it, but the pressure was really on with all of the record labels there. Sony Records, Curb Records, Lyric Street, which is owned by Disney were all there. Universal Records and CMT (country music television) was there filming. Gibson guitars also came and brought their special Prevost display motor coach. It was fun, but I was under a lot of pressure. It seems like the concert was a homerun. What has come your way in the wake of the show? You know, that was the big intention. Normally artists in Nashville have what is called a “showcase” and they invite all of the labels. Sometimes they come, sometimes they don’t, it just depends on if their interests are spiked and we were able to do that very well. The thing that we really thought was neat was that we were able to incorporate the two worlds: The music world and the ATV motocross world. Oddly, most of the agents and representatives that showed up didn’t even know the race existed. A number of them brought their families to the race and they were really taken in by what goes on. They were saying things like, “Wow, an ATV can actually jump like that? People train for this stuff? Oh my goodness!” The series is very lucky to have an ambassador like you to help bring the music world and the racing world together. Thank you very much. That’s my whole goal, to bring the two together. I think the country music world and the ATV scene are a perfect fit. If you read the lyrics of today’s country music, they mirror the scene at the ATV races. It's all about family and good times, and enjoying life to the fullest. Well, can we expect a repeat performance at the 2009 ATV Dirt Days? Hey, I’m all about it! Hopefully I’ll have a major record deal by then, and more folks will know who I am and more folks will know about ATV racing. That’s all I wish for! 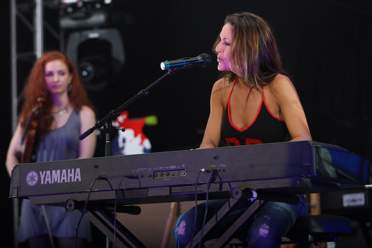 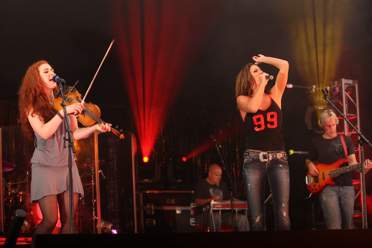 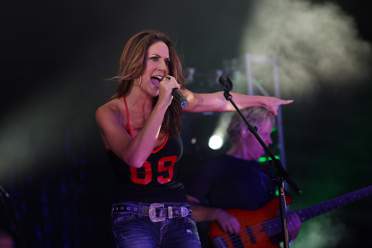