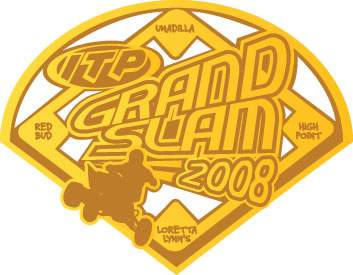 MORGANTOWN, W. Va. (May 8, 2008) -- Riders contesting the ITP Tires/Moose Racing ATV National Motocross Championship Series Presented by Parts Unlimited will have a little something extra to shoot for this season as the ATV Promoters Group (ATVPG) unveils the ITP Tires Grand Slam Series. This four-race championship within the National Motocross Championship will award custom Gold, Silver and Bronze medals to the top-three overall finishers along with an extra “Grand” $1,000 to the Pro winner at each event.

"We are excited to offer this addition to the 2008 racing season,” said Sam Gammon, ATVPG Director. "The ITP Tires Grand Slam will make it possible for riders to earn a little something extra this season, while also providing a second chance for riders who were either unable to compete in our earlier rounds or had a rough start to their racing season."

"ITP Tires is pleased to partner with the ATVA on this meaningful and exciting program," said Craig Peterson of ITP Tires. "This program will give significant rewards and accolades for riders who participate in the most prestigious events this season. We're thrilled to be a part of it."

Riders must compete in all four races in order to be eligible for the Grand Slam. The final awards will be presented following Loretta Lynn’s Dirt Days.  The overall top three in each of the 34 classes from Pro to Youth will earn custom ITP Grand Slam medals.

The next race for the ITP Tires/Moose Racing ATV National Motocross Championship Series Presented by Parts Unlimited, the Concept Haulers ATV Showdown at Sunset Ridge, is scheduled for May 10-11 at Sunset Ridge MX in Walnut, Ill.