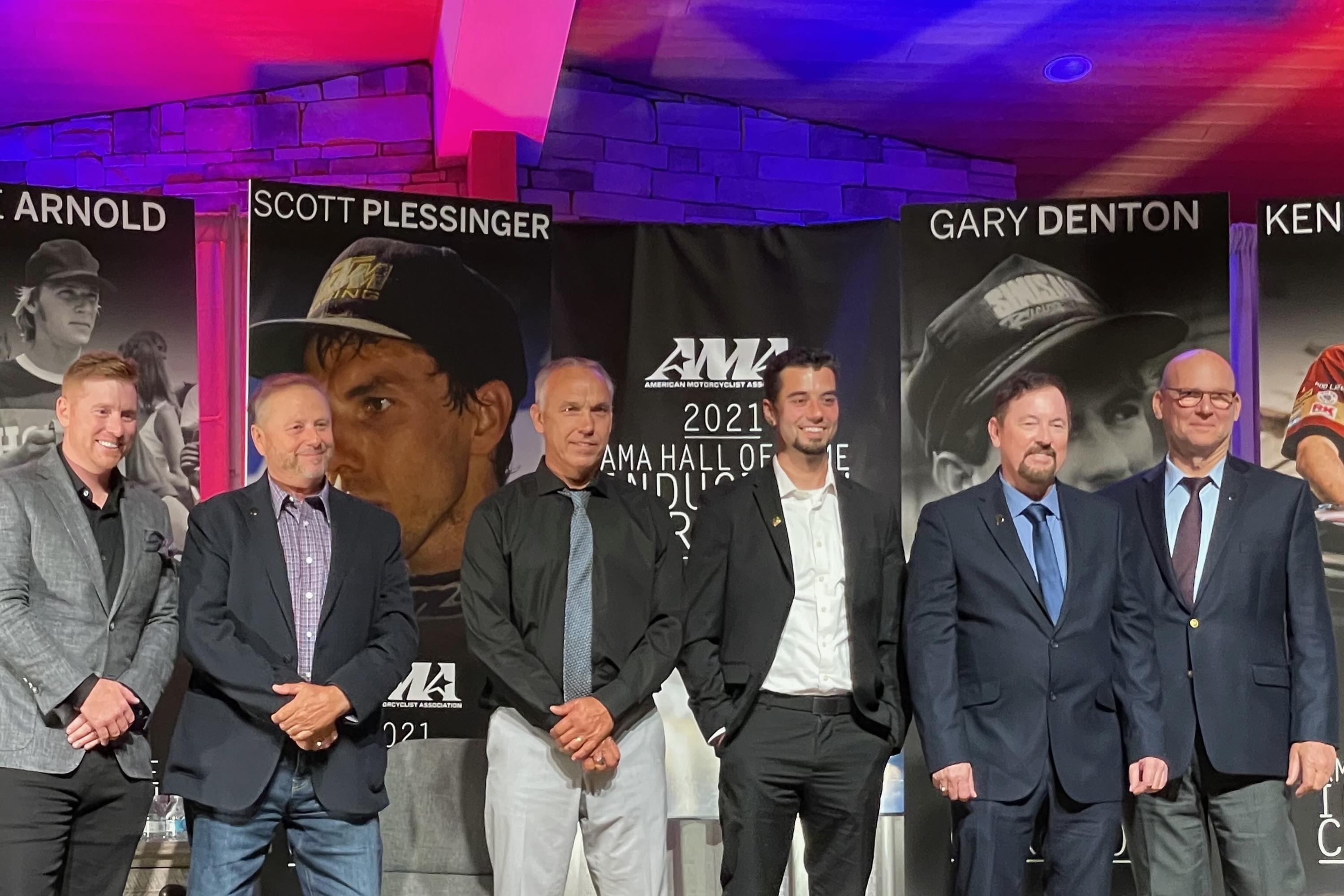 Ceremony emcees, well-known actor and director of stage, screen and television Perry King and motocross rider, sidecar enthusiast and sideline reporter Laurette Nicoll, guided the audience through the careers and accomplishments of the inductees.

“Tonight, we are reminded of the determination that lands a select few men and women at the top of their class,” King said. “Each has found the strength, the courage, the sheer grit and fortitude to face down any force that rises up against them, whether in competition, in industry, in the halls of government, or in the court of public opinion.”

Dave Arnold
Dave Arnold worked for American Honda from the mid-1970s through 2013, developing some of the greatest racing talents — and motorcycles — in the sport, and helping forge the program’s historic dominance in AMA Supercross and Motocross alongside legends like AMA Motorcycle Hall of Famers Marty Smith, Roger DeCoster, Bob Hannah and Jeremy McGrath.

Arnold’s talents, which contributed to 60 titles on Honda factory and factory-supported teams over the years, transcended race operations to production-level research and development, resulting in advancements in production motorcycles that impacted motorcyclists all over the world — and will continue to do so for decades to come.

“I want to thank the AMA Motorcycle Hall of Fame,” Arnold said. “I’m really honored and humbled to receive this recognition. I’ve looked up to many Hall of Famers as mentors and role models, so to be in their company is an honor. I’d like to dedicate this to my younger brother Richard, who passed away earlier this year. He loved motorcycles and racing as much as I did.”

Nancy Davidson
Nancy Davidson, wife of AMA Hall of Fame Legend Bill “Willie G.” Davidson, was one of the most impactful female icons in the American motorcycling community. She contributed to charity rides and supported the Muscular Dystrophy Association through the Harley-Davidson Dealer network and held the No. 2 membership card in the Harley Owners Group. A lifelong advocate for the AMA, she espoused the freedom and adventure of the motorcycle lifestyle, influencing ridership across the globe.

In the motorcycle community, few families elicit such admiration as those who carry the Davidson name. Besides the duties and responsibilities that come from the Harley-Davidson’s namesake, they serve as the enduring spirit of American manufacturing, its motorcycling traditions, and are elevated into our cultural ethos as celebrities. And none represented that so aptly as Nancy Davidson.

Although AMA Hall of Fame Legend Willie G. Davidson was unable to attend his late wife’s induction, the Davidson family created a beautiful video to be shared with the audience.

“Well, this is your day Nancy,” Willie G. Davidson said, “we are very, very proud of you … This is kinda a special way to celebrate our lives. We rode together; Nancy was a great partner. We crisscrossed the country, and it’s a tribute to a great lady. For that we are thankful and we are proud to be represented in the AMA Hall of Fame.”

Gary Denton
Gary Denton was the dominant ATV racer the ’80s and ’90s, winning eight AMA ATV Grand National Championship titles from 1987 through 1994. Before racing ATVs, Denton started his motorcycle racing career at age 14 and went pro at age 16, getting his first major title at the CMC Night Nationals in the 125cc class in 1976. From late 1978 to 1982, he raced professionally, with a best finish of fourth in the 125 National class and scoring 13 top-10 finishes.

After racing locally for a couple years, he had the opportunity to begin racing ATVs in 1985, getting a factory ride with Suzuki in 1987 to race in the AMA ATV Grand National Championship. From that point on he dominated the ATV series, winning the championship eight years in a row and setting the standard for excellence in the division.

“I’m truly humbled to receive this honor,” Denton said. “This is the highest compliment, being voted in by the industry and my peers! I also want to congratulate the other inductees.”

“When I look back on 4-wheel ATV racing and all my good fortune” he continued, “having all these people help me, I realize I am beyond blessed by God and He is the one that has directed, guided and put all of these amazing people in my life!”

Tommy Hays
Tommy Hays was one of the best Class C dirt trackers of his time, and arguably the most successful racer from the pre-Grand National Championship era (1933-1953) who was not previously inducted into the AMA Motorcycle Hall of Fame. Hays’ AMA National career ran from 1937 to 1941, giving the young rider enough time to set records that lasted decades beyond his untimely death on the racetrack.

Hays, who was skilled as well as fearless, won seven AMA National TTs during his career, and currently sits in fourth for most career AMA National TT wins. He was among one of the first riders to receive a National Number and was voted Most Popular Rider for 1941 after his death.

Loretta Lynn
Legendary country singer-songwriter Loretta Lynn was born April 14, 1932, in Butcher Hollow, Ky. Although widely known for her success within the country music industry, Lynn’s massive impact on the motocross community can be found at her and her late husband Mooney’s ranch in Hurricane Mills, Tenn., where the AMA Amateur National Motocross Championship has been held for four decades.

Since 1982, Loretta Lynn’s Ranch has welcomed some 60,000 riders. Hosting an average of 36 classes vying for AMA National No. 1 plates each year, the annual event is known as the site of the largest amateur motocross event in the world. Lynn is the first person to be inducted into both the AMA Motorcycle Hall of Fame and the Country Music Hall of Fame.

“My mom has such an incredible legacy with her music,” said Loretta Lynn’s daughter Patsy Lynn Russell. “But thanks to [Hall of Famer] Dave [Coombs Sr.] and [his wife] Rita for just happening on the ranch after a race in Oklahoma and seeing the property, that legacy has been enhanced in so many ways through motocross sports. So many people from all over the world may not know one song my mom sang, but they know her from motocross…from all of you coming to the ranch and participating. And that means the world to us. Thank you!”

Scott Plessinger
Scott Plessinger was a top off-road racer in the late 1980s and early 1990s, and while he started his career in motocross, it didn’t begin to take off until he shifted to off-road racing. By the fall of 1986 he was winning nearly every local race he entered, but it wasn’t until 1989 that he finally claimed the ultimate prize, scoring his first AMA Hare Scrambles National Championship.

Throughout his successful career, Plessinger won two Grand National Cross Country (GNCC) titles in 1994 and 1995, and two AMA National Hare Scramble titles in 1989 and 1992. The four-time National Champion from Hamilton, Ohio has scored 41 national event wins during his career, mostly on KTMs.

“Definitely want thank everyone that voted for me,” said Plessinger. “I really didn’t expect this … and I was really surprised to find out I was voted into [the Hall of Fame].”

Tolbert’s engine and chassis combinations have also claimed an additional six 600cc AMA Championships and 31 AMA 600cc wins since 1988. Both championship and win tallies are second place only to Hall of Fame Legend Bill Werner (13 championships and 149 wins).

“There’s a long list of people that have been involved in my career,” Tolbert said, “and I can never thank everyone … Chris [Carr] and I, we fueled off each other and learned how to race together. We have lifelong memories together and now here we are today. I’m thankful to the AMA for doing this and having us here and all the people who voted. And being involved with Jared [Mees] and Indian Motorcycles has been phenomenal.”

In AMA Supercross competition, Villopoto has the fifth most wins in the 450cc class, elevating him to third all-time in championships behind AMA Motorcycle Hall of Famers Jeremy McGrath and Ricky Carmichael. In AMA Pro Motocross, Villopoto became only the third individual to claim multiple championships in both the 450cc and 250cc classes.

“This all started with my grandpa,” Villopoto said while overcome with emotion. “Grandma and grandpa are here, thank you to them. My wife and boys are here — Kristen, Gage and Brax — thank you. My dad’s been gone for some time, and he’d be stoked and amazed that we made it here.”

About the American Motorcyclist Association
Founded in 1924, the AMA is a not-for-profit member-based association whose mission is to promote the motorcycle lifestyle and protect the future of motorcycling. As the world's largest motorcycling rights and event sanctioning organization, the AMA advocates for riders' interests at all levels of government and sanctions thousands of competition and recreational events every year. The AMA also provides money-saving discounts on products and services for its members. Through the AMA Motorcycle Hall of Fame in Pickerington, Ohio, the AMA honors the heroes and heritage of motorcycling. For more information, visit americanmotorcyclist.com.

Not a member? Join the AMA today: americanmotorcyclist.com.