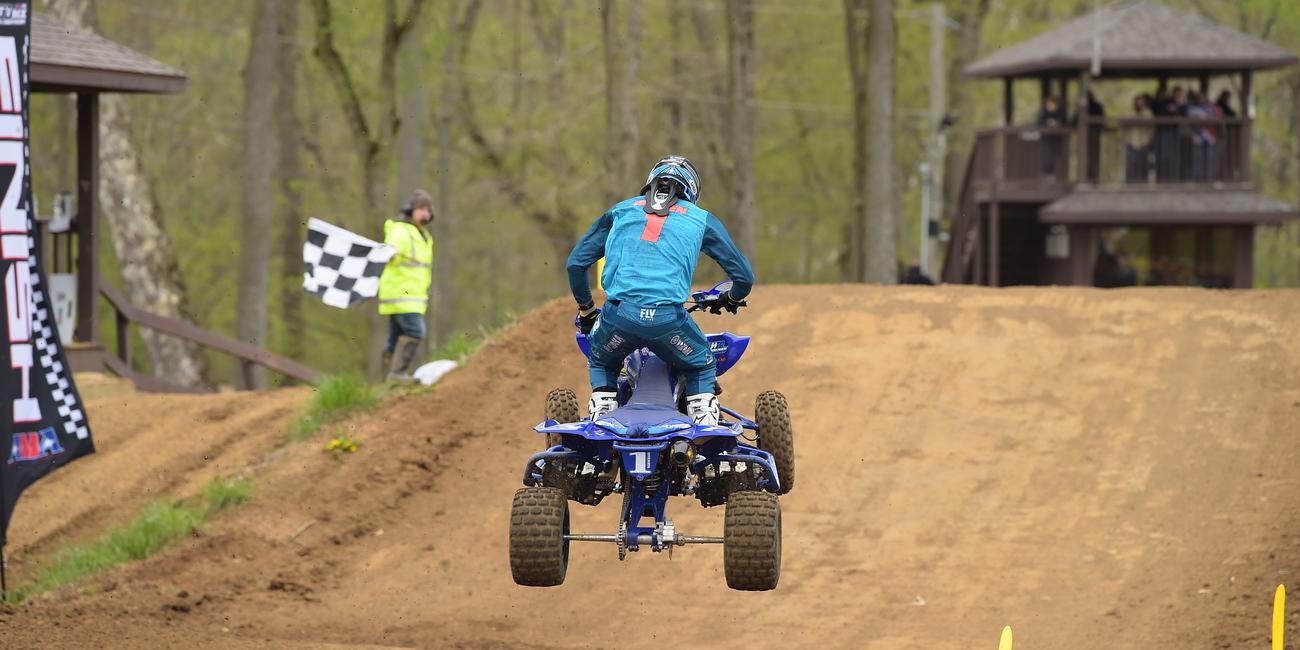 CRAWFORDSVILLE, Ind. (April 29, 2019) – The 2019 ATV Motocross National Championship (ATVMX), an AMA National Championship, made its way to Crawfordsville, Indiana this past weekend for the 5th Annual Ironman ATVMX National. With inclement weather in the forecast, the AMA Pro ATV motos were moved up to 1 p.m. and 3 p.m., however the weather would make an appearance before the second moto took off the gate.

Wienen Motorsports/Yamaha/Maxxis’ Chad Wienen fought his way through the day to earn his first-ever Ironman ATVMX National overall win. As the gate dropped on moto one Wienen found himself in the second place position, but would soon move into the lead and never look back. Wienen would then head to the line for a muddy second moto, where would jump out to a good start and take over the lead right away. Wienen began to battle with fellow AMA Pro riders, but would soon place a gap over the field and ultimately take the win by 27 seconds. After finishing third at the first two rounds, Wienen has earned his first 2019 win, and is now in control of the National Championship points standings.

After a rough first moto, Tbrown 84 Training/CST Tires’ Thomas Brown found himself in the sixth place position. Brown was running at the front of the pack, but a mistake would set him back to 12th at one point in the first moto. Working his way back through, Brown would make it up to sixth before the checkered flag flew. When the second moto came around, Brown was ready to go and makeup for the first moto’s mistake. Just after the halfway point in the second moto Brown knew he had to put in a hard charge as he was sitting fourth, and that is just what he did making the pass for third and coming through in the second place position. Earning a moto score of 6-2, Brown took home third overall and remains second in the points standings.

GennUSA Racing/CST Tires/Corrosion Specialties’ Nicholas Gennusa earned his best finish of the season thus far in the year with a fourth overall in Indiana. Gennusa would come through in the third place position, after starting out in sixth, just as moto one reached its halfway point. Managing to hold off the rest of the AMA Pro ATV athletes behind him, Gennusa would take the checkered flag for moto one in the third place position. As moto two got underway, Gennusa would make a mistake on the second lap causing him to fall back to the 10th place position. As he worked his way through the muddy conditions, Gennusa would make his way all the up way to fifth by the time white flag flew, indicating one more lap to go. Unable to catch fourth place, Gennusa would take home a 3-5 moto score ultimately earning fourth overall.

Putting in his best overall finish of the year was AMA Pro rookie, Corrosion Specialties/Londerville Steel/Maxxis Tires’ Brandon Hoag. After a 5-4 finish on the day, the 2018 Pro-Am Champion took home fifth overall at the third round of racing this season. Hoag currently sits seven in the points standings as the series heads to South Carolina for the next round.

JH Racing/Lobo Transport/Root River Racing’s Samuel Rowe earned sixth overall after coming through ninth in moto one and sixth in the second moto. Ryland Johnson Racing/GBC Motorsports/Ye Olde Cycle Barn’s Westley Wolfe ended up in seventh overall after an impressive ride in the first moto, coming through in fourth. However, in the second moto Wolfe would find himself only completing seven of the 10 laps, and earning a 13th place finish position.

One big question on everyone’s mind, where is the #88 machine? Well, Phoenix Racing Honda’s Joel Hetrick was running out front in the first moto, pulling ahead of fellow AMA Pro ATV competitions until an issue with the machine made it impossible for him to continue on in the race. Before pulling off, Hetrick tried to salvage whatever position he could as he maneuvered around the track slowly. Hetrick would score 16th place in the first moto. As the second moto took off, Hetrick was off and battling with Wienen as the pair ran at the front of the pack. This time Hetrick’s machine complete eight laps before it suffered another mechanical failure. After a very rough day, Hetrick would finish 14th overall and fall back to fourth in the National Championship standings.

On Sunday, the Pro-Am class took the track for some intense racing. Ford Brothers/Fly/Maxxis’ Bryce Ford came out with the early lead in moto one, but it was Team Nine6Nine’s Logan Stanfield lessening the gap as the moto wore on. Ford would hold onto the lead and take the moto win with Stanfield coming through 1.05 seconds behind him. Koster Racing/Quadified Racing Engines/Walsh Race Craft’s Wes Lewis would round out the podium with a third place finish.

In the second moto it was Stanfield jumping into the lead, with Ford working his way up to second and setting his sights on the overall win. Stanfield would hold onto the lead and engage in a heated battle with Ford until the competitors came around on the sixth lap. Ford would make the pass stick, and take the overall Pro-Am win at Ironman. Stanfield would come through in second, while Lewis would finish fourth in the moto but take home third overall.

In the Production Stock Premier class, Wienen would once again become victorious in Indiana. After finishing second in the first moto, Wienen would come through and take the moto two win which earned him the overall win in the newly added class for the 2019 season. Brown would clinch the moto one victory, but would finish second in moto two, taking home second overall. Team Nine6Nine’s Alan Myers earned a 5-3 moto score in the class, earning third overall.