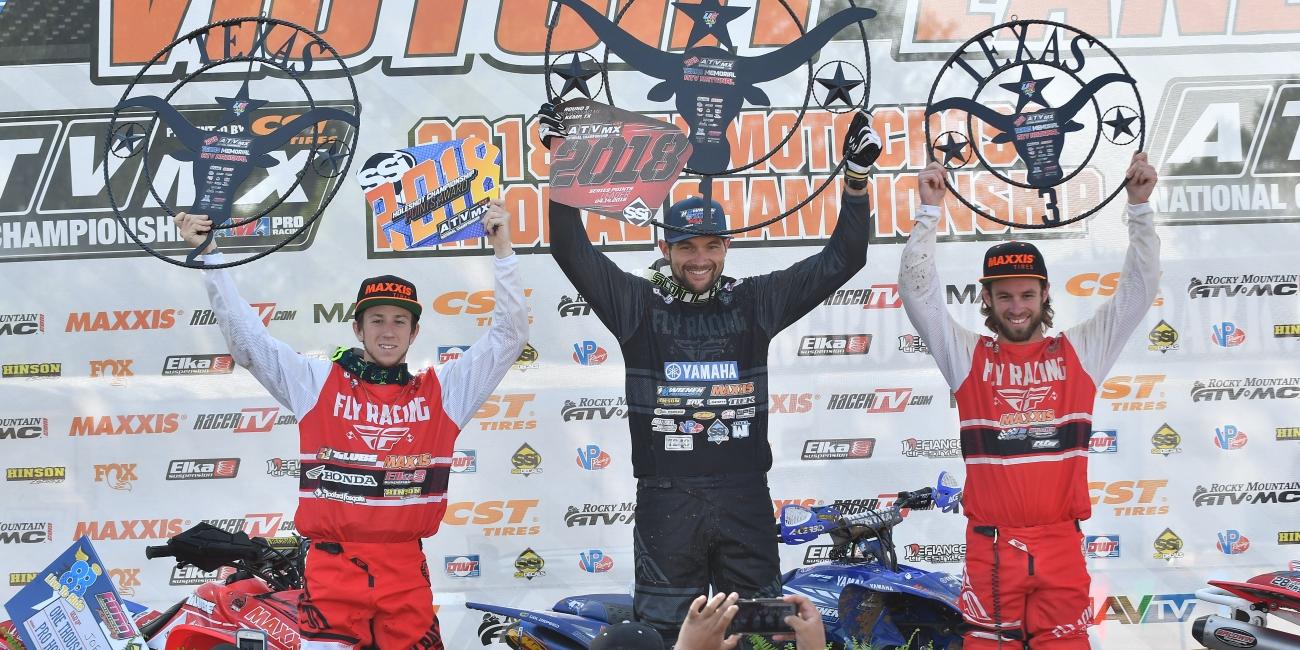 KEMP, Texas (April 16, 2018) - Round three of the 2018 ATV Motocross National Championship (ATVMX) Series presented by CST Tires, an AMA National Championship, headed deep into the lonestar state for a showdown that would rival any old western tale ever told. With a crazy swing in temperatures preceded by a night filled with high winds and heavy rains, the racers would be very skeptical as to how well the track at Underground MX would shape up. However, by the time practice started the track was almost perfect as a drying wind and strong sun helped turn things around and in favor of the racers and crew.

Rockford Fosgate/Ti-Lube/Honda’s Joel Hetrick would come out and lock down yet another ATVriders.com fastest qualifier award as well as earning the added purse provided at this round for the holeshot. With a specialty pro purse possible, most of the riders were eager to get strong starts and finish well for a piece of the fortune being offered.

Moto one saw Hetrick secure the holeshot, the money and the moto win. Hetrick had some good fortune on his side, as he nearly took himself out in a rough section, but he was able to rebound and retain the lead. Wienen Motorsports/Yamaha/Maxxis’ Chad Wienen put on a hard charge, but found himself nearly duplicating Hetrick’s mistake. Wienen was able to hang on, and remained in the second place position after the pair had built up a sizeable gap from the rest of the pack. Tbrown84 Training/CST Tires’ Thomas Brown was digging deep to try and earn a win in front of his hometown friends and family. Brown would ultimately finish 3rd in the first moto.

The racing behind the leaders was intense, as the track was getting rough. The riders started to mix it up through the deep rutted turns, and over the jumps that demanded precision and the will to back off the throttle when needed. Baldwin/Jeff Rastrelli Land Grading/Ford Brothers Racing Honda Jeffrey Rastrelli was doing all he could to reel in the top three, and would have to settle for fourth. GBC Motorsports/Hetrick Racing/Walsh Racecraft/Solo Pilot’s Westley Wolfe, who secured his best finish this season, and is still mending from a crash at the opening round, closely followed Rastrelli with a fifth place finish.

While the first moto was exciting, moto two started to build its own level of intensity, as everyone knew Wienen was gunning for the win. The start was once again a few seconds of chaos as the pro class fired off the gate and headed for the first turn. Just as in moto one, Hetrick would clinch the holeshot and build on his success from moto one. However, some misfortune struck Hetrick and he ended up high siding a berm in the same spot as he did last year allowing Wienen a wide open pass, which he took full advantage of, and ran away with the moto two and overall win at round three. As Hetrick did his best to get his Honda unstuck and re-fired, his chances for a podium were looking slim.

With true grit, Hetrick put his head down and was back to making up ground. Hetrick would finish fifth in moto two, giving him a second overall on the day. After a very uncanny set of circumstances the added bonuses to this round should make him enjoy the day, and look towards the upcoming rounds where he can get back the points he left on the table here in Texas.

Finishing third overall was Jeffrey Rastrelli who was locked in a duel with Thomas Brown nearly the entire second moto. For several laps Rastrelli shadowed Brown, and then they would swap positions and battle through more laps seemingly equally matched. The brawl ended when Brown snapped a chain giving Rastrelli second in moto two, and third overall.

GennUSA Racing’s Nick Gennusa was having one of his best weekends in Texas as he finished fourth overall on the day with moto scores of 7-3. Wolfe ended the weekend with a fifth overall finish. Gennusa and Wolfe were both riding with lingering injuries from previous rounds, but proved they had a no quit attitude in them this weekend. Wolfe would also race the Pro-Am class, and take the overall win.

The series heads to Ironman Raceway in Crawfordsville, Indiana on May 5 and 6 for round four of the 2018 ATV Motocross National Championship Series. It is looking to be another epic round of competition as the points tighten and the championship battle intensifies.