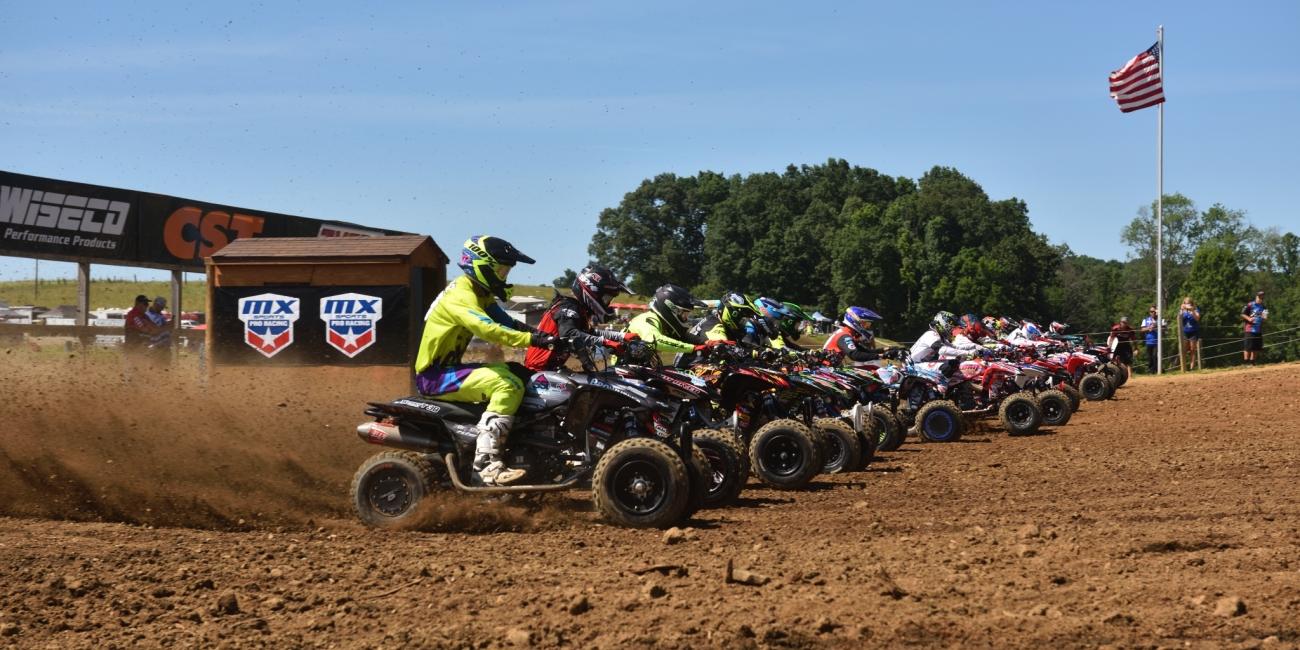 BLOUNTVILLE, Tenn. (June 3, 2017) – Coming into the Muddy Creek ATVMX National fresh off his first overall win of the season, Maxxis/Elka/Liquid Wrench/Honda’s Joel Hetrick carried the momentum with him to earn his second win of the season in Blountville, Tennessee today, Saturday, June 3. The 2017 Wiseco ATV Motocross National Championship (ATVMX) presented by CST Tires, an AMA National Championship, has reached its halfway point with round five, where only seven points now separate the championship contenders.

When the pro riders took to the iconic track in the morning for practice and qualifying, not much changed between the first and second timed qualifying sessions. At the conclusion of the second session, Hetrick topped the charts and earned his third ATVriders.com Fastest Qualifier Award of the season.

Hetrick continued with his dominance grabbing the SSi Decals Holeshot Award in the first moto. He was accompanied by Ford Brother’s Racing/Solo Pilot’s Westley Wolfe in second, and his biggest competition, Wienen Motorsports/SSi Decals/Walsh Racecraft/Yamaha/Maxxis/7240’s Chad Wienen was sitting inside a top-five position.

Hetrick made quick work of the early lead and began running his own race, while Wienen found himself in a heated battle with JB Racing/Root River Racing’s Jeffrey Rastrelli who had moved into second as the lead lap came to a close. After multiple attempts to take the position from Rastrelli, Wienen was able to put it together and move into second at the mid-way point of the race.

By that time, Hetrick was too far ahead for Wienen to catch. Rastrelli remained in tow of Wienen, and Root River Racing/CST Tires/Pro Motorsports’ Thomas Brown rode comfortably in fourth as they crossed the finish line. Baldwin Motorsports/Ford Brother's Racing/Root River Racing’s Ronnie Higgerson moved his way through the pack to round out the top-five in the first moto.

A new face emerged in the second moto holeshot where AMPED Vossman Motorsports-backed Sam Rowe claimed his first ever SSi Decals Holeshot Award. Hetrick wasn’t too far behind and secured the lead position early on. Meanwhile, Brown found himself in an unfavorable situation where he went down on the start. This mistake would only fuel Brown to push himself to the limits for the remaining 15 minutes of the moto.

Sitting just inside the top-ten was Wienen, who quickly became a man-on-a-mission to return back to the front. With the first four laps complete, Wienen sat in fourth behind Higgerson. Rastrelli kept Hetrick honest, but the gap remained the same throughout the remainder of the moto.

Wienen made the pass for the podium position after the halfway point of the race, and began to catch Rastrelli. The two found themselves racing wheel-to-wheel for the final two laps of the race, where Hetrick was the first to the checkered. Rastrelli held off Wienen for second and Wienen crossed the line in third.

The top three finishers in the second moto filled the overall podium with Hetrick, Rastrelli and Wienen taking the top three spots. Hetrick’s performance earned him valuable points in the championship chase where he now sits just seven points behind the defending champion, Wienen.

“It's been awhile since I got a one-one so it feels awesome to come get it done here at Muddy Creek,” said Hetrick. “It feels great to cut the points lead in half and I look forward to keeping the momentum rolling into the next round.”

Higgerson finished just off the box with fourth overall, and GennUSA Racing’s Nick Gennusa followed in fifth. Brown put in what could perhaps be named the best performance of the day where he recovered from the first turn crash to finish eighth in the second moto and sixth overall.