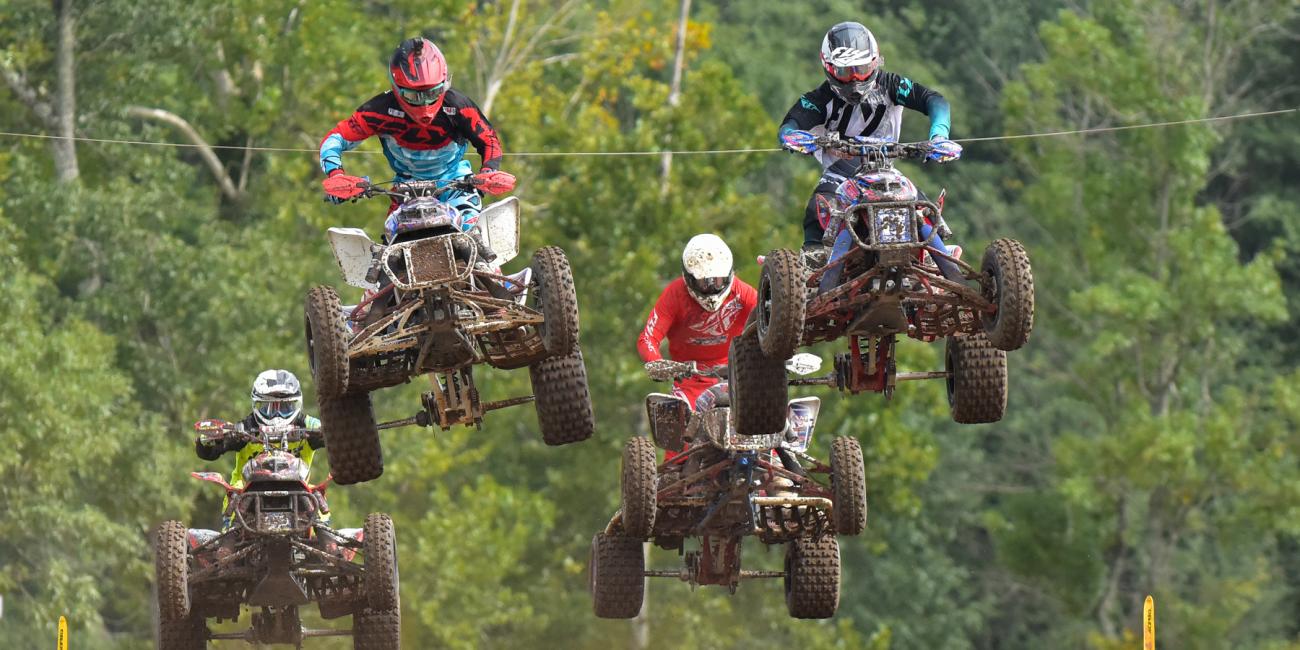 With an overcast sky, the track conditions were near perfect once the world’s fastest ATV racers took to the coveted racetrack. After a rough start to the day, Wienen Motorsports/Yamaha/Maxxis/SSi Decals/Walsh Racecraft/FLY Racing’s Chad Wienen was able to put it all together to grab the ATVriders.com Fastest Qualifier Award narrowly edging out Maxxis/Elka Suspension/Liquid Wrench’s Joel Hetrick.

Once the gate dropped signifying the start of Moto 1 it was the Honda rider of Maxxis/FLY Racing/Baldwin Motorsports’ John Natalie who jumped out to the early lead and grabbed the SSi Decals Holeshot Award. Natalie was accompanied by SSR Honda/Quadified/Fourwerx’s Wes Lewis and Hetrick.

Four-time National Champion Wienen quickly found trouble in the third turn right before the famed 10 Commandments, while he was following JB Racing/Root River Racing/Gold Speed Tires’ Jeffrey Rastrelli. The pair became tangled and in a standstill. Once they were able to ungroup and restart their quads the duo was in the last two positions.

“In the first moto about the third turn, Rastrelli came in pretty hot trying to make a move,” said Wienen. “I followed in the inside line and I got stuck with Rastrelli. I started in fifteenth and knew I had a long way to go because the race just started. I had to calm myself down a little bit and then I just started picking guys off to salvage some points.”

Once Hetrick made the pass for the lead, Natalie began to feel pressure from Maxxis/Liquid Wrench/Elka Suspension/Honda’s David Haagsma. Natalie put forth his best effort to hold off Haagsma, but he would eventually slide by in the open sweeper turn.

Meanwhile, Wienen was busy working his way through the pack from a dead last start. With only two laps remaining Wienen was in a podium position but wanting more. As the white flag waved Wienen would make the last minute pass on Haagsma for second, but Hetrick claimed the win with a commanding lead of 22 seconds.

When Moto 2 was underway Wienen bolted out of the gate eager for redemption, but it would be Haagsma claiming the SSi Decals Holeshot Award. By the time they checked into the finish line for the completion of the first lap, Wienen had secured the lead with Haagsma and Hetrick following in second and third.

Hetrick sat in the top spot once the moto reached it halfway point. Once the Pennsylvania native had a clear track he slowly began pulling away from the rest of the field. Wienen was running a consistent race in second, while the battle for third started brewing behind him between Rastrelli and Haagsma. Although Rastrelli was able to make the pass for third Haagsma kept him honest the entire moto even constantly showing a front wheel in a turn.

“I feel great that I got to run up in the front for a while in both motos,” said Haagsma. “I had a good battle with Rastrelli in the second moto and I tried to pass him back, but I was just a little too tired. I knew I had the overall for third if I just finished fourth so I just played it safe to get third overall.”

By the conclusion of the second 20-minute moto it would be Hetrick reigning victorious once again and standing on the top of the box (1-1), with Wienen (2-2) and Haagsma (3-4) rounding out the overall podium. Rastrelli would recover from a dead last start in the first moto for fourth overall (7-3) and AGX Designs/Walsh Racecraft/Maxxis’ Nick Gennusa landed a spot in the top five with a pair of fifth place finishes.

“My bike worked great all day today,” said Hetrick. “Today really showcased all the hard work with two 20-minute motos in brutal heat and rough track conditions. Everything hooked up awesome for a perfect weekend where I was able to gain some points and I’m ready for the Edge of Summer MX.

The ProX ATVMX series takes a month off before the Edge of Summer MX season finale at the Soaring Eagle Casino and Resort. The inaugural event is set for Friday, September 9, in Mountain Pleasant, Michigan.