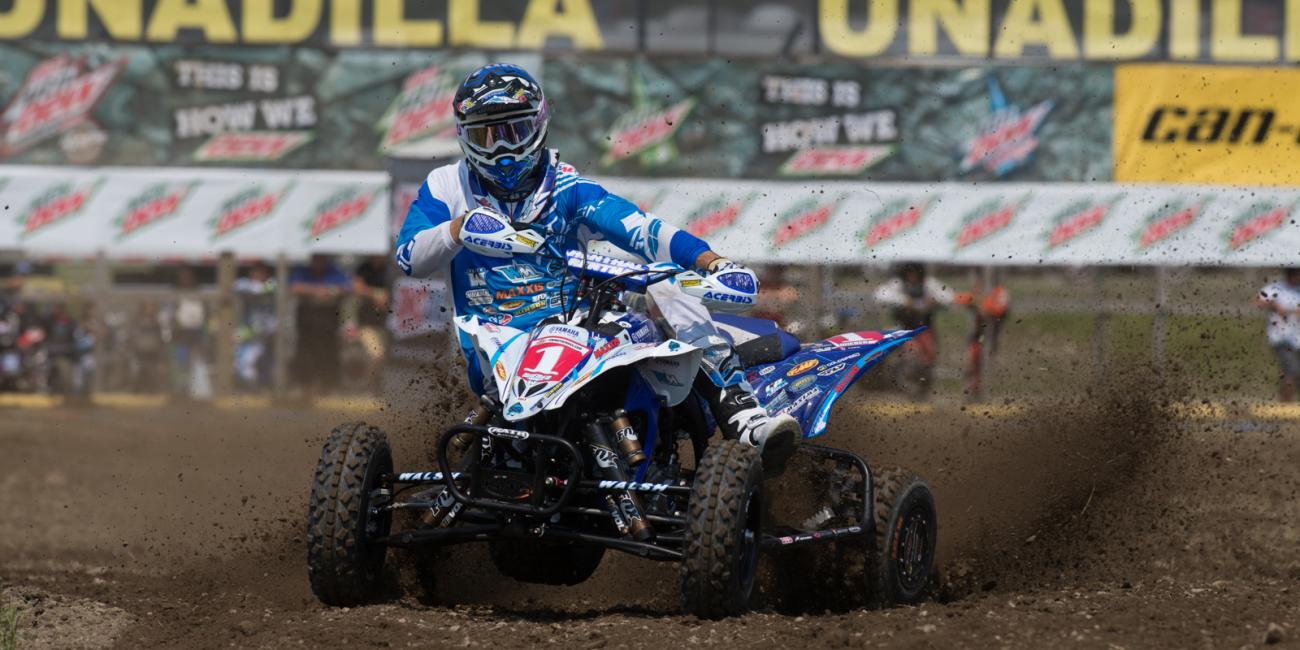 The Mtn. Dew ATV Motocross National Championship, sanctioned by AMA (ATVMX), made its annual foray to Central New York on Saturday for the NYCM Insurance Northeastern ATV National at legendary Unadilla. The seventh stop of the nine round championship was a showcase of dominance by defending back-to-back AMA Pro ATV Champion Chad Wienen, who took one step closer to a third-straight title by sweeping the day’s motos aboard his Wienen Motorsports/SSi Decals/Walsh Yamaha to earn his third straight win at the track and his fifth overall victory of the season.

Near-perfect weather greeted the field and JB Racing/DWT/Mtn. Dew Live Wire Can-Am’s Joel Hetrick was the first to take advantage by posting the fastest lap of practice and earning the ATVRiders.com Top Qualifier Award for the second time this season.  With momentum on his side, Hetrick came out with a solid start in sixth, but out front Motosport.com/RRR/Ford/DWT/Walsh Honda’s John Natalie grabbed the SSi Decals Holeshot Award and looked to take advantage of putting himself up front early. JB Racing/Cheerwine Can-Am’s Jeffrey Rastrelli emerged in second with BCS Performance Can-Am’s Josh Creamer in third.

Wienen began his day in fourth, but methodically started working his way forward, passing creamer for third on Lap 2. On Lap 4, the moto turned after Natalie broke a shock and ultimately retired from competition. Rastrelli assumed the lead, putting Wienen in second and in a position to challenge for the top spot. Just one lap later, the points leader moved past Rastrelli and steadily pulled away. Rastrelli followed with a career-best second-place finish, with Wienen Motorsports/SSi Decals/Walsh Yamaha Thomas Brown overcoming a seventh-place start to finish third, just ahead of Hetrick. Baldwin Motorsports/PEP/Upperman Racing Honda’s Josh Upperman rounded out the top five, taking advantage of a cut tire suffered by Creamer, who followed in sixth.

Creamer rebounded from his hard luck in Moto 1 to capture the SSi Decals Holeshot Award in the afternoon’s final moto with Wienen close on his rear fender in second. Brown emerged in third while Rastrelli continued his stellar day in fourth.

Creamer held on to the top spot, fending off relentless pressure from Wienen, for half of the moto before the Yamaha rider finally made a pass count on Lap 4. Once out front, Wienen consistently edged away from his rivals. Creamer held on to second for several laps before Brown eventually made his way past. Wienen and Brown provided a 1-2 result for the Wienen Motorsports effort with Creamer bouncing back to finish third. Upperman fought his way into fourth, with Rastrelli hanging on for fifth.

Wienen’s 1-1 effort was his second of the season and earned him eight points over all his competitors. Brown completed a 1-2 sweep for the team in second (3-2), while Rastrelli ended a career day in third (2-5). Creamer finished fourth (6-3) with Upperman rounding out the top five (5-4).

Wienen’s control of the ATVMX standings now sits at 64 points over Hetrick with Brown jumping into third, 74 points back. If Wienen ends the penultimate stop of the season at RedBud in two weeks with at least a 50-point lead, he’ll be crowned champion.

The Mtn. Dew ATV Motocross National Championship will take a week off before returning to action for the eighth and second-to-last round of the 2014 season on July 26-27. RedBud in Buchanan, Michigan, will host the Rocky Mountain ATV/MC RedBud ATV National.