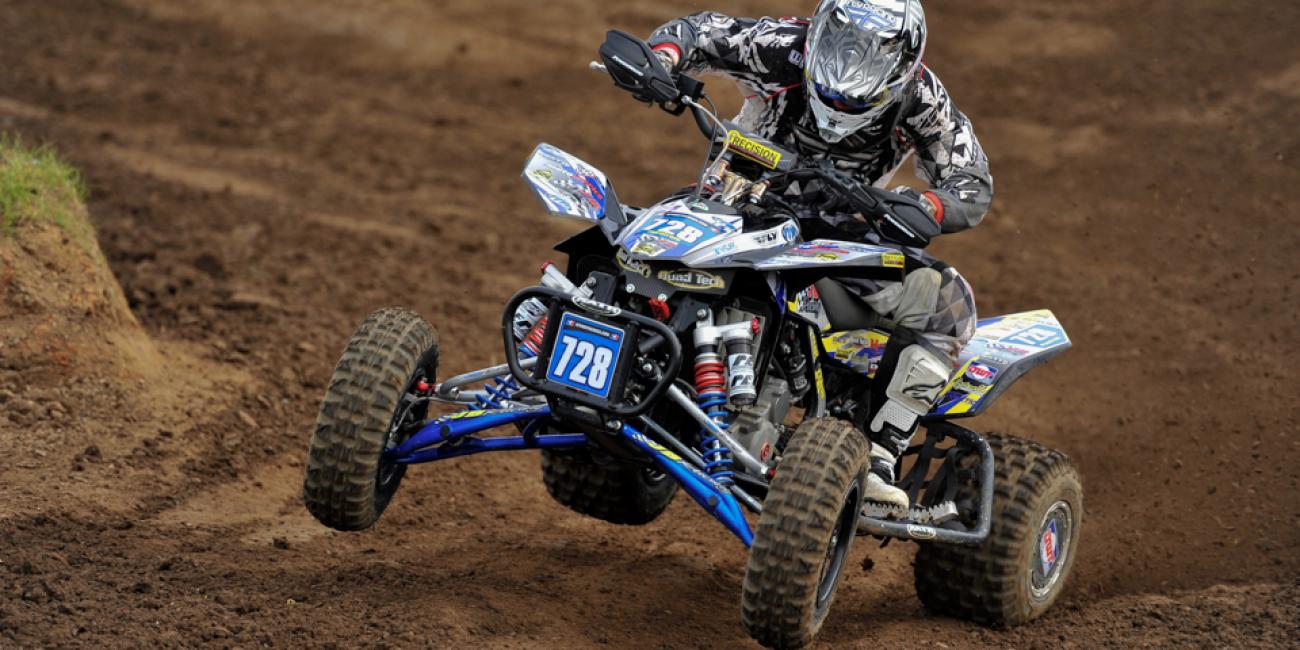 Christmas 2013 is all but here and as quiet as things have seemed lately, there has been a little news released recently. It is good to know that quiet times are starting produce more positives as we move toward the 2014 racing season.

The recent announcement of Ken Hill to a more active role in the ATV and GNCC Racin’ Nations has stirred a lot of excitement.  If you have not liked the ATV MX Championship Facebook page you need to do so. Things have really been happening there. There has been a lot of information beginning to leak out there. There have been some good flashback photos on the page and direct links to the latest ATV Motocross episodes from www.RacerTV.com.

Speaking of Ken, let’s see what he has on his mind this week:

The response so far from asking for content and updates has been pretty solid, and for that I thank you! The new season is roughly 90 days away and from viewing the various social media sites, it looks like many are up to their elbows in building quads for the new season.

There are rumors flying around as a few riders that stepped out of the series are looking to step back in, and that is a testament to how intense you all are. It is hard to stay away from the friends that are formed while racing and we hope that those looking for support are able to find it.

There has also been some big news this past week with Nick Gennusa being snatched up, flying the Wienen Motorsports colors for 2014 in the Pro Am class. Most recently, Nick made a trip to the Dominican Republic where he ripped his way to a 1-1 sweep! Great job Nick!

It appears that Silas Lamons will be making the jump to the Pro class for 2014, adding yet another solid racer to that gate. Look for an upcoming interview with Silas on the ATV Motocross website soon.

That's about all I have this week, short and sweet but only due to being wrapped up in my own little world as the Christmas holiday has overtaken things here. Not to worry, I considered the final few weeks in 2013 to be a parade lap and when the gate drops on the year, we will come out on the rev limiter as things come together for the 2014 season.

My family would like to wish your family a very Merry Christmas and hope that the time you get to spend with family is indeed the best present of all. God Bless all of our deployed soldiers, airmen and Marines as they continue to allow us to live in peace and keep us safe from our enemies.

Thanks, Ken! One of the most exciting things that Ken mentioned that I read over the past week was the addition of Nick Gennusa to The Wienen Motorsports Team. Nick will join the 2- Time AMA Pro ATV Motocross Champion Chad Wienen and the 2013 AMA Pro ATV second place rider Thomas Brown, contending the highly competitive Pro Am Class. One has to feel this will be a perfect fit with the true professionalism that all three riders bring to the sport they could quickly become an unstoppable force and the “Blu Cru” of Yamaha may be about to dominate the ATVMX world very soon.

The 2013 Pro Am runner up, Ronnie Higgerson, is looking ahead to 2014 with a lot of extra support for the upcoming season. He has also gotten a little extra attention in the media. The folks at the AMA, the ATVMX Nationals sanctioning body, recently did an interview with Ronnie about what last season’s success and what it all means for 2014. You can check out the American Motorcyclist article here.

Austin Clemens has been a rider on a mission the last few years. Austin is part of a family that lives to go to the races. His whole family supports each other and everyone has a job of sorts. Of course that is the norm in the ATV racing world it seems though there is only one rider per machine, there is a team of folks working toward success. I asked Austin to send me a note on things and let us get to know him a little better because he could be someone we are asking next season, “who is that guy?” Well, this is who this guy is:

HAPPY HOLIDAYS! The 2013 race season started off with what I thought was going to be one of the worse seasons as far as weather goes. And we were right. I’m a pretty good mud racer, from the mud racing I have done in local series over the years

It didn’t bother me having the first few races in the mud, but when the whole season started to end in mud bathes I wasn’t looking forward to going to the races because we all knew it was going to rain! But I fought the whole season and showed everyone that I was for real this year.

I raced in the Open B and Production B classes, both which proved to have fierce competition! I sat in 2nd and 3rd place in points for Open B most of the season, which I thought was a huge accomplishment because I have never been so close to winning a championship late in the season.

With 5 rounds left in the season I really came to life winning 4 out of the 5 races and letting everyone in Open B know if they wanted the championship they were going to have to come out swinging. I ended the season at Loretta’s with a 1st place finish in Open B, which was the icing on top of the cake, because I won the championship also.

It was a fun year, besides all the mud and rain and I can’t wait for the 2014 season to begin. We are heading to Florida to train here over Christmas break and I have been hitting the gym more and more getting ready for that first gate drop of 2014.

I would like to thank my Mom, Dad, Brother Evan, Girlfriend Abby and my other sponsors Janssen Motorsports, Hetrick Racing, FTR Graphics, Oneal, Motoworks, Bel-ray, Pro armor, Matrix concept, and everyone else that helped and supported me this past season and into 2014.

Top Youth Division contender #55 Jake Visnic is another rider I took quite a bit of notice of the last couple of seasons. Jake’s pops sent me a message to let me know what’s been going on as of late with them. It is so cool to know that Jake is such a well-rounded athlete and student. Jake stays busy all year round and like many, he uses the conditioning from his participation in school sports to help him on the track. Here is what Rob had to say about what they have been up to:

Since we left Loretta’s we have switched from ATV racing to football.  Jake’s team, the Belmont County Warriors had an awesome year going 10 and 1 on the year and they won the league championship.  What a game that was! It took 5 overtimes to decide it!!!

Now Jakes focus is wrestling to keep in shape and stay conditioned through the rest of the racing off-season. We will be heading south as so many do over the holidays to knock off the winter rust and get some seat time.  He sure can’t get any good seat time here in Ohio this time of year so it’s on the road to find some warmer, dryer weather.

2013 was a breakout year for Jake in the ATV world, actually won his 1st and 2nd ATVA overall at Muddy Creek and then he was fortunate enough to get to visit the podium again at Unadilla. We hope that success will help for next season. 2014 won’t bring much change for Jake, he will be competing for the championship in 70cvt, and 90 auto Jr classes and is also hoping for a solid top 3 by years end in the 90 Mod Jr. class.

Jake will continue riding for Hetrick Racing as a major supporter of his program. He would love nothing more than to give Hetrick’s a couple more youth championships!!

Have a great holiday season and we will see you in Georgia in a few months.

That’s it for now. Till next time, Merry Christmas and God Bless Your Heart and All Your Vital Organs.