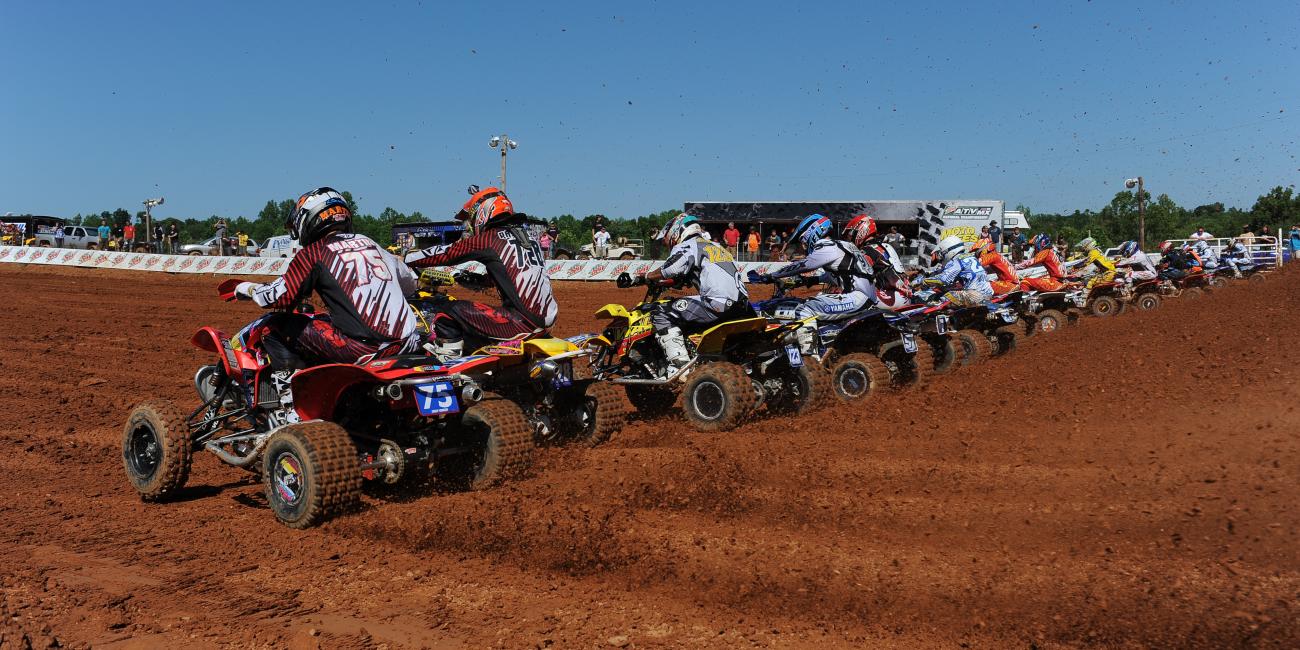 As the 2013 Mtn. Dew AMA ATV Motocross National Championship is now officially over it is time to start looking toward the future and 2014. The new tentative schedule was released and the final schedule will be announced soon. There may be a couple of date changes but all in all it is pretty close to right.

As the new season is still a few months away there are several things going on. One thing in particular is some rule change discussion and even class changes. The rule change proposals will post on the website for review and comment for about 10 days so make sure you check them out and voice your opinions.

There is also a question concerning next year’s banquet that we would like to throw out there for comment. It appears we have two dates as an option for next season. The banquet will once again be scheduled to be in Morgantown, West Virginia at the Waterfront Place Hotel. It is just the date in question so if you have an opinion you are encouraged to speak up.

The dates to choose from are:

Send your comments to [email protected] and this will help the powers that be better decide which will work best for the masses.

As 2014 approaches and the anticipation builds, I had a chance to catch a few words from a few of the riders that are working toward next season. One thing is for certain we are a long way out but the optimism overall in our sport is at an all-time high and this could herald the coming of a new day in ATV MX.

Some of the biggest news came from Ronnie Higgerson this weekend when he told me of his new “BCS/Can Am Team Ride”. Obviously super excited I wanted to know more so Ronnie sent this note and I want to share it with you all:

Hey Rodney, How are things going your way? Things are good here; I had a great time at the banquet last weekend. Since the season ended I've pretty much been working and saving up money for the yearly trip to Florida for training and now since bow season is in that takes up any free time I have. Next season is going to be my best one ever with the most support I've ever had in my career. BCS Performance has picked me up as their Pro Am rider along-side Creamer who is returning to fight for the pro championship. I’ll be his official teammate, pitting out of the BCS rig with him. They take care if a full race bike that is provided and a mechanic dedicated just for me, I just show up and ride. I'll still run pro on Saturday but my main focus will be Pro Am on Sunday. This gives me the opportunity I've never had, not having to worry about building a bike on Friday at the nationals which is always how it works it ha-ha this will give me the most time I've ever had to focus on what I need to do and my training.....that Pro Am championship is the closest to mine it's ever been. To say that I, my family and friends are excited is a huge understatement! Next season is going to be great, as long as the rain holds off lol Thanks for taking the time to hear me talk and the opportunity to be in the site lap. I'd like to give a huge shout out to BCS Performance, Can Am and everyone else that's making next season possible. See you all on the gate in 2k14!

I also had a chance to talk to Megan Manshack who showed rocket speed this past season. Megan is pumped to have had such a great season and sent this:

Well I just attended the ATV National Banquet last week for 2nd place overall in Women's. It was actually the first time I have ever gotten to attend a national banquet and this was the first year I completed an entire national series. I am super excited about that1 This weekend I am attending our local LSQR banquet for winning the championship in Collegeboy 16-24. I raced a total of 19 races this year....which is the most I have ever competed in one year in the 12 years I have been racing! Right now I am at home training and riding trying to get prepared for next season. Next year will be even busier for me since I will be racing two series again, but I will be racing two classes in each going for a total of four championships. At the Mountain Dew ATV MX Nationals I will be competing in Women's again and 450 B, and at the LSQR I will be running Collegeboy and Open B. It will be an interesting year but I am excited for the challenge! I will be training harder than I ever have in the past, and it will help a ton having the whole Root River crew down at our track in Splendora, TX so I have some awesome riders to practice with and push myself even harder. I am really excited about being a part of the Root River team for a second year in a row! We have a great team of riders with a ton of people backing us and I feel next year will be our best year yet!

I also plan on putting on a "girls only" riding school down here in Texas sometime in January. We are going to make a whole weekend of it! No boys allowed I will be teaching just about everything from jumping, to cornering and even a little bike maintenance so I can help these ladies learn to take care of their own machines. It will be for all skills levels and ages! I am really excited to be able to help some of the up and coming women racers and even some ladies just starting out riding.

Thanks for the update and it sure sounds like a busy time for Megan! I can’t wait to see what she has in store for us in 2014.

Brett Musick has also been busy and has some big changes ahead. It seems he will be riding the Can Ams as well and had this to say:

Hey Rodney, Things have been pretty good. I have been just been playing a lot of football. Haven’t got to ride much lately but I have been working out a lot and running and stuff. We should get our practice track back pretty soon so that will be nice. We are going to race the mid-atlantic winter series this winter and try to go down south almost every weekend. I’ll be switching to can am this year. I have 2 quads up at BCS right now and they are building them. The quad will have Walsh suspension products with Fox shocks. I’m pretty excited to make the switch. But that's about all that's going on right now.

Liam Cater the Englishman has been busy after a rough season as well. He had the update of the man that is truly living out his dreams from the bottom up. I can’t wait to see where it leads him in the future. Here is what he has to say:

After having such a good year in 2012 finishing 3rd and 4th, my luck changed this year, plagued with problems from numerous mechanical failures to breaking my collar bone into 3 pieces at walnut IL which ended my season early due to a prolonged recovery time after poor medical advice. I was told to let the bone heal, but after 6 weeks of it not healing I then had to have surgery the day before Unadilla, then wait a few more months to be in the healed state in in now. The silver lining to this bad year was that I had taken a job for racer TV (just before my crash) working for my good friend Gloop Mahey (ripitup films) filming the pro races for racer TV. This was a great experience and was a way for me to still attend the races and see all of the great people in the ATV motocross community each weekend as well as keep myself afloat whilst being away from my regular job as an electrical engineer. I am very much looking forward to hopefully working with Gloop and racer TV for the 2014 season; it's great to take a different role as well as riding. As for next year I am hoping to contend the entire series in the pro-am class, I had already decided on this last year after racing A class for almost 3 years I decided I needed to step up. So I am putting together my best race program yet, preparation is well underway, with both my practice bike and race bike (Walsh crf450 hybrid) almost finished which is a record for me as my bikes are usually finished the week before round 1. I'm very excited to be riding the hybrid rather than a Honda TRX which I've been on since I came to America in 2011. Not only because it's new machinery which will hopefully mean less failures, but also it's nice to be on some of the best equipment out there with all Walsh components and PEP shocks which Blommel motorsports kindly helped me out with. I am still working out sponsorship deals which is not easy after a bad year but I am lucky to have people that have stuck by me for the last few years mototrim, DMS repair, breeze wood proving grounds, motoxperts etc. right now I am just keeping my head down working my job, finishing the bikes and working on my fitness, ready to start training somewhere down south at the beginning of next year once my collar bone is 100%.

Thanks for your time; I look forward to seeing you all next year.

Liam’s progress has been fun to follow and to know the lengths he goes to be a Mtn. Dew AMA ATV Motocross National contender is nothing short of inspiring. Anyone knowing his story is kind of intrigued with his effort and dedication to something that he has dreamed of since a young man in England.

I also had a chance to communicate with the young Niamh Shaw and she told me “I'm in the middle of moving to bowling green to start training for next year and going to run some indoor races.” I immediately wondered why Bowling Green and she told me “Closer to Jeremiah Jones and closer to my dad’s work and Greenville and the arenacross tour.”  I thought to myself that we are in store some big things in the future from this young girl’s national motocross champion.

The new season is still some 5 months or more away and the anticipation is already starting to build. All I can think is that we need a national ATV indoor series somewhere. I’m just saying that’s way too long to have to wait.

That’ll have to do it for now. Send any new you would like to share about the offseason and your plans 2014 to [email protected].

Till next time, God Bless Your Heart and All Your Vital Organs.