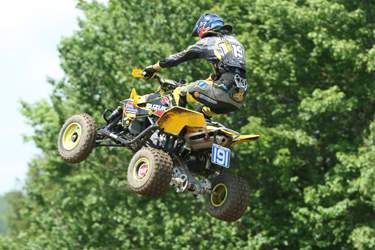 With Saturday's heat replaced by muddy conditions on Sunday, Wimmer said an intelligent strategy helped him in the end

"In the mud, you really have to finesse the bike so it doesn’t slip out on you," said Wimmer, who remains in the points lead. "I did what I had to do to stay behind John (Natalie) in the second moto and, since I didn’t need to pass him for the win, I just stayed consistent and rode smart."

Lawson won the first moto after overtaking both Wimmer and Josh Upperman (No. 20 American Honda/Baldwin Motorsports Honda) to take the lead. 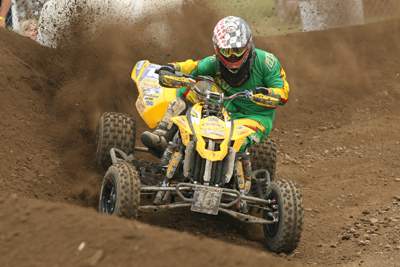 "Everything just happened so fast," said Lawson. "These guys are so fast and you really have to be on your game. I am feeling really confident in my team, my bike and myself, so that makes me ride well."

Natalie earned his second moto victory of the year, after catching and passing Byrd and dominating the second moto.

"My Can-Am just pulls in this mud; we really had it dialed," said Natalie. "We considered putting on the big tires, but checked out a couple classes before we went out and decided against it which was the right choice."

In the Riders' Championship, Byrd moved past Doug Gust (No. 55 Team Rockstar/MSR/Suzuki/Yoshimura/Pro Taper Suzuki) to take second in the points chase, 61 markers behind Wimmer. Gust is third.

Team Can-Am moved past Honda for second in Manufacturers' Cup points and is now just 43 points behind leader Team Suzuki.

Meanwhile, the $5,000 ITP Tires Grand Slam Presented by QUAD Magazine remains tight with two different winners (Byrd and Wimmer), and a numerical tie between Byrd and Lawson for the lead in the championship-within-a-championship program. 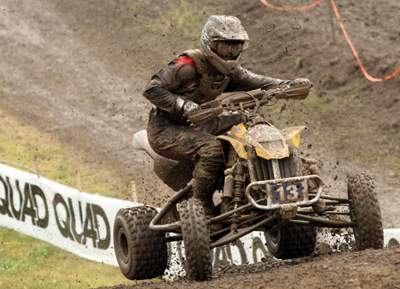 The next race for the ITP Tires/Moose Racing AMA/ATVA National Motocross Championship is scheduled for June 21-22 at Muddy Creek Raceway in Blountville, Tenn.

WEATHER WOES...The race weekend featured some of the most diverse weather this season. Saturday was hot and humid, while Sunday, at around 2 p.m., the skies opened, causing the second Pro moto to be run in rainy, muddy conditions.

CAN-AM CLEANS UP...Can-Am's new DS450 won both motos on Sunday, with John Natalie and Jeremy Lawson doing the honors and moving the company's tally to three moto wins this season. In addition, Lawson's podium finish represented his second consecutive runner-up effort and Can-Am's third overall podium this season. Along with being the weekend's title sponsor, Can-Am also brought out its popular test ride program, where fans got the chance to test out the company's newest quads.

PLANTE AND HAAVISTO RETURN...French Canadian rider Jasmine Plante and Joe Haavisto returned to the national tour this weekend, which featured 570 total entries of which 30 were Pros.

GREMLINS...Both Jason Dunkelberger and Doug Gust suffered mechanical problems on their ATVs this weekend and they finished 19th and 20th, respectively, overall.