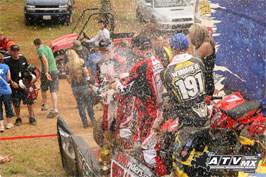 DANVILLE, Va. (April 27, 2008) -- Is Joe Byrd back? "Let's hope so," said a triumphant Byrd after sweeping both motos to win Sunday's TriangleCycles.com ATV National at Birch Creek Motorsports, marking his first victory of the season. The event was Round 4 of the 2008 ITP Tires/Moose Racing AMA/ATVA Pro Championship.

Byrd (No. 7 Honda) traded the lead once with Dustin Wimmer (No. 191 Team MSR/Suzuki/Yoshimura/Pro Taper) before winning and the first moto, and ran away with the second moto. The two-time and defending AMA Pro Champion finished ahead of Wimmer, who notched his fourth consecutive podium. Jason Dunkelberger (No. 19 East Coast ATV/Honda) earned his first ATV Pro podium, finishing third.

"This track really worked for me this weekend," said Byrd, who was near the top of the timing charts all weekend. "We've been working hard this season, and we're going to keep doing what we're doing.

"This will definitely build momentum going into the next race," added Byrd. "More importantly, it will raise the morale in the Byrd compound, making all of those 18-hour shifts meaningful."

With the victory, Byrd moves up four positions to third in points, 59 markers behind Wimmer. Doug Gust (No. 55 Team Rockstar, MSR, Suzuki, Yoshimura, Pro Taper) is second in the title chase, while John Natalie (No. 13 Can-Am) and Josh Creamer (No. 9 Team Monster Energy Drink/Kawasaki) are fourth and fifth, respectively.

The next race for the ITP Tires/Moose Racing AMA/ATVA Championship is scheduled for May 10 and 11 at Walnut, IL.

ENTRIES STRONG...Total entries for this weekend were an event record 654 in 34 classes, with 26 riders representing the Pro Class.

IRON MEN...John Natalie, Jr. and Chad Wienen were both suffering the after effects of injuries sustained prior to the weekend. Natalie has an infection in his left eye, and Wienen was involved in an accident last week while training for this event, which left him with a sore shoulder. Interestingly, the two made contact in the first moto and Wienen ended up with the worst of the incident, going off in one the track's uphill sections. Neither rider was seriously injured in the tangle.

TRACK CONDITIONS...Saturday was warm and dry, but evening thunderstorms washed over the Danville area Saturday evening and didn't stop until 7 a.m. Sunday. However, due to hard work by the track staff, the wet weather only delayed Sunday's program by one hour.