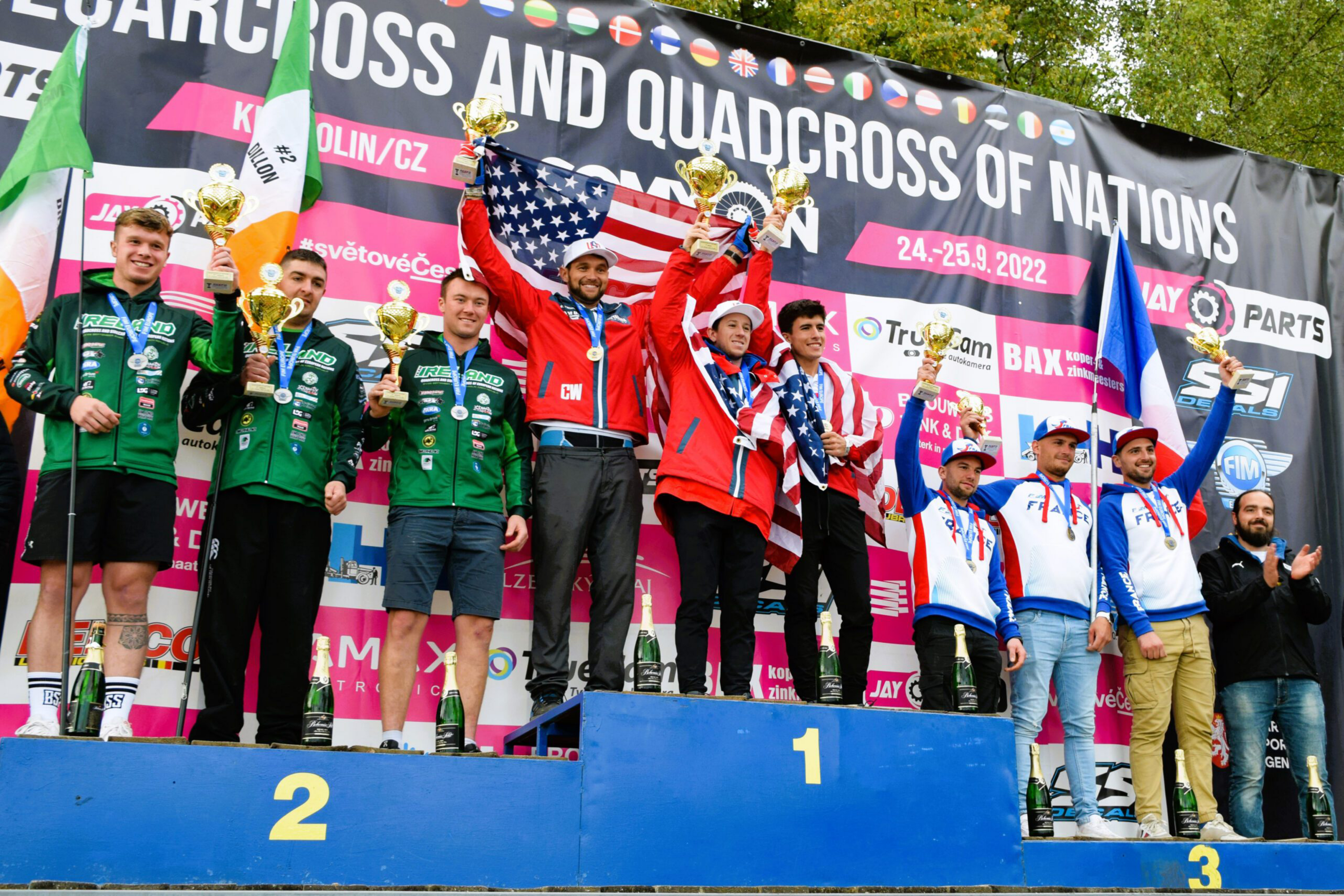 Ford, Hetrick and Wienen Dominate at Quadcross of European Nations

“A great performance from all three of our athletes,” said Team Manager Mark Baldwin. “We couldn't be prouder of them. Even though we had a setback in moto one that got us behind the eight-ball right away, it never showed on or off the track following it. Chad’s quad was ready to go within an hour following the incident, with time to spare prior to the start of moto two. It was definitely a team effort. I cannot thank everyone involved enough.”

The weekend started with Hetrick and Wienen winning their qualifying races on September 24. The team’s rookie at the event, Ford, finished second in his qualifier. With strong times, the team ended the day with first gate pick for Sunday’s competition. Team USA ATVMX was well-positioned against the 15 countries that had qualified for the next day’s motos.

On September 25, each team member raced in two of the three motos that were 25-minutes plus two laps and featured 30 riders per moto. Starts were setup in two rows, one rider from each country lined up behind each other.

In the first moto of the day, Wienen pulled a strong start. Ford tried to drop in right behind him, sitting in the top five. They both put in strong lap times throughout. Ford went on to secure the win, and Wienen would finish 29th due to a mechanical issue. With the lowest score to be dropped at the end of the competition, the team knew they still had a chance at the title. The team was positioned seventh headed into the second moto.

In Moto 2, Hetrick and Wienen were running up front when a red flag ended the race with 8 minutes and two laps remaining. Per the rules, the results stood and Hetrick would take the win. Wienen, eight-time AMA Pro ATV Motocross National Championship Series champion, would finish right behind him in second. The team now sat second overall going into the last moto.

Ford pulled the holeshot in the final moto with teammate Hetrick in fifth headed into Turn 1. By the end of the first lap, three-time AMA Pro ATV Motocross National Championship Series champion Hetrick had moved into second. On Lap 5, the teammates battled on the track, and Hetrick got around Ford. They stayed close together, pulling away from the rest of the field, until the checkered flag waved. Hetrick captured the win with Ford in the runner-up spot.

With the team’s five best moto scores combined for the overall finish position, the team was able to once again seize the title at the international competition.

“I really enjoyed the whole experience and getting to be teammates with the best team in the world,” said Ford. “I’m still in shock, and honored, to be a part of something so amazing! I want to thank my teammates and everyone who makes it possible for Team USA ATVMX to race in Quadcross of European Nations. I’m grateful to be bringing home the gold!”

"It was a great weekend at the Kramolin track for the Quadcross of European Nations,” said Hetrick. “Team USA ATVMX brought home gold, and I am proud to be a part of that. I am pumped with my performance, going 1-1, in both of my races. The team worked really well together, and I am happy to have had this experience with them.”

“It’s always an honor to be selected for Team USA ATVMX and to be able to work as a team to bring home another world championship,” said Wienen. “I can’t say enough of the riders and the entire crew working together to ensure we were all able to perform our best this past weekend. The hospitality and warm welcome from all of the other countries and riders was really incredible, especially after being unable to compete the past two years. It really felt great to be back.”

“The results page shows the perfect score, but without the right team the perfect score would not be possible,” said Team Delegate Harv Whipple. “It was in no way as easy as it shows on paper. However, when they play our national anthem on the podium, and the other countries and federations stand in silence to pay respect, it makes it all worth-while. Pride is an understatement for how I feel about this year’s team. Obviously, the athletes have their own personal supporters, but a special thank-you to everyone involved in sponsorship. Also, much gratitude goes out to the organizer and FIM Europe for being so welcoming to our federation, the AMA.”

Team USA ATVMX supporters can view photos from the event at facebook.com/teamUSAatvmx and on Instagram at @teamUSAatvmx.

Next year’s event is tentatively scheduled for September 2023 in Cingoli, Italy.

The team’s efforts are made possible thanks to the following sponsors: