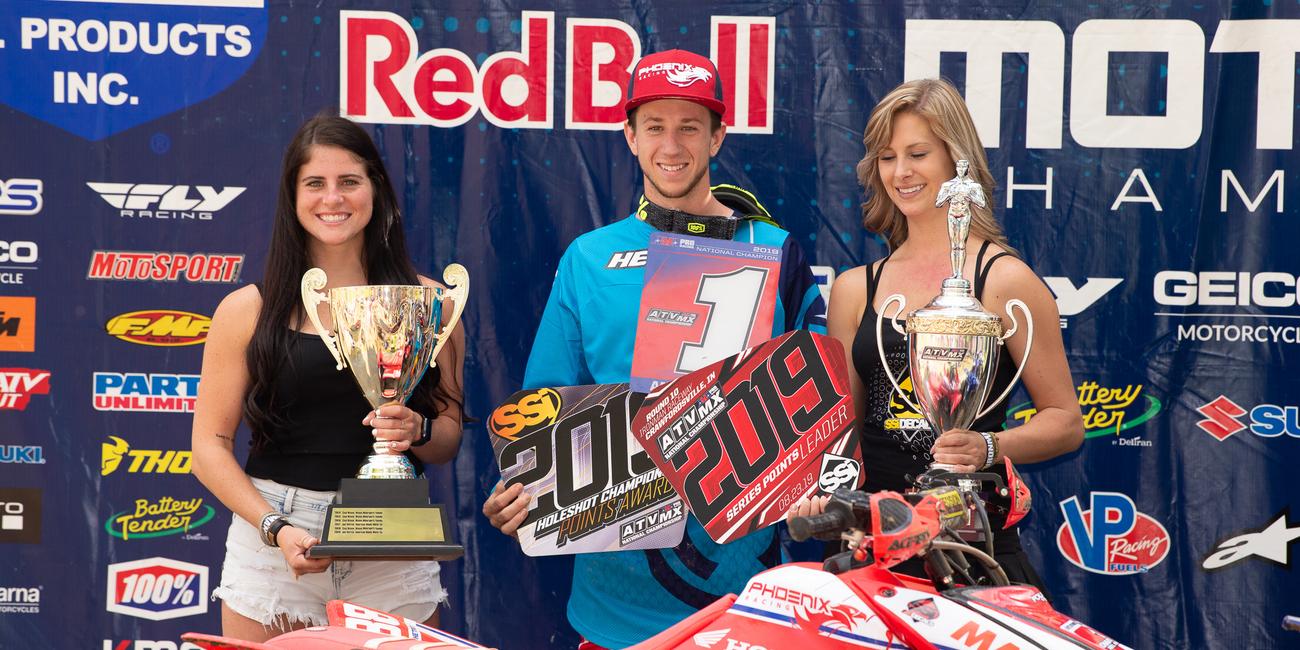 The intensity and stress was at an all-time high as the series combined the fastest bike racers on the planet on the fence to watch it all go down as Ironman became one of the elite tracks in history to ever feature both two and four wheeled AMA Pro racing.

Entering this round, Hetrick had been showing that he wanted that number one plate back this season. What Hetrick hadn’t counted on is the mechanical issues he faced throughout the season that allowed the defending champion to build a small points cushion that seemed almost impossible to deconstruct. With Wienen’s remarkable record of remaining on the podium race after race, he was pinned to earn another title. However, that changed at RedBud when Wienen recorded his first off-podium overall finish. Suddenly a new spark emerged under the Honda tent, and numbers began to be crunched heading into the penultimate round. As Hetrick emerged from Loretta’s as the points leader, everything was coming down to the season finale at Ironman Raceway.

The weather was near perfect as the dawn broke over the event and soon it was time for a season full of effort and dedication to play out. Fans clamored about taking in this special event and all it had to offer. For the top two racers, nerves were shot and while both did their best to contain the excitement, one only had to look in their eyes to see it was having an impact that not only was playing on their day, but it spread through each team as they went about triple checking everything before the gate would drop on the first moto. Rain had fallen on Thursday and the track was dug in and now saturated making the first timed qualifier almost meaningless. By the time the second qualifier came the track had started to shape up and once again Hetrick secured the fastest time followed closely by Wienen proving both had things dialed in and were ready to go after each other once the gate dropped.

The time had come as the riders gated up for moto one as fans cheered and their yells of support echoed across the track. The gate dropped and the roost flew high as the first turn was about to be assaulted and it would be Hetrick landing the first punch by taking the holeshot. Wienen was on him, nearly pulling alongside as they crossed the official holeshot line, but his first bobble came soon after in turn two when he was forced into the rough chop on the outside of the turn. From that point on, it was Hetrick doing exactly what he needed to do. He had built up enough of a lead to catch a break here and there to save some energy for the second moto. Hetrick claimed the moto one win came without any real pressure or any real challenges, however, Wienen had taken second moving the bar up a notch as everything would now come down to the final moto. Running a strong third was a hard charging TBrown84 Training/CST Tires’ Thomas Brown as the top three racers headed to the pits for changes and to shake off the intensity of the that moto.

The time between moto’s seemed to go by at warp speed as the crowds of fans gathered to see this brawl that was about to go down. The gate dropped for moto two and once again it was Hetrick racing to the first turn and earning another SSi Decals Holeshot Award. Wienen did not have a great start and would have to get past a few riders that lay between him and his chance to run with the leader. The action heated up as Wienen took the lead and was soon facing a serious challenge from Brown as the Yamaha mounted riders streaked ahead of Hetrick who had a comfortable spot in third and was riding smart. All he had to do was land on the podium to earn the 2019 National Championship. As the last few laps came into the play the action was up front between Wienen and Brown, however all eyes were on the red machine sitting in third.

After a season wrought with highs and lows, Hetrick was taking his Honda to the championship and had nearly everyone on the fence cheering him on. The moto ended with Wiene taking the win, followed by Brown and Hetrick coming through in third. Hetrick would pull off the track and into the podium area as he was greeted by friends, family and his team as the 2019 National Championship was back in his hands.

Throughout both moto’s, Jeff Rastrelli Land Grading/Balwin Motorsports’ Jeffrey Rastrelli and Ryland Johnson Racing/GBC Motorsports/Ye Olde Cycle Barn’s Westley Wolfe would be another battle to watch as the pair went after each other relentlessly in both motos. Rastrelli, who is still dealing with some health issues, showed he was still able to put in a solid race as Wolfe proved he had taken a few steps forward in his young pro career. Wolfe would end up taking fourth overall and Rastrelli fifth overall on the weekend. Several rookies had an excellent weekend as Brandon Hoag left Ironman with sixth and Cody Ford taking ninth overall.

The season is over however the celebrating will continue as another crazy season is put to bed. A razor thin points battle amongst the greatest racers in the world that started from the first moto and wouldn’t be decided until the last moto is all anyone could ask for as one incredible season is now in the history books. The action is not over for the top three as Joel Hetrick, Chad Wienen and Thomas Brown will soon head to Germany to defend their championship title in the Quadcross des Nations in August.