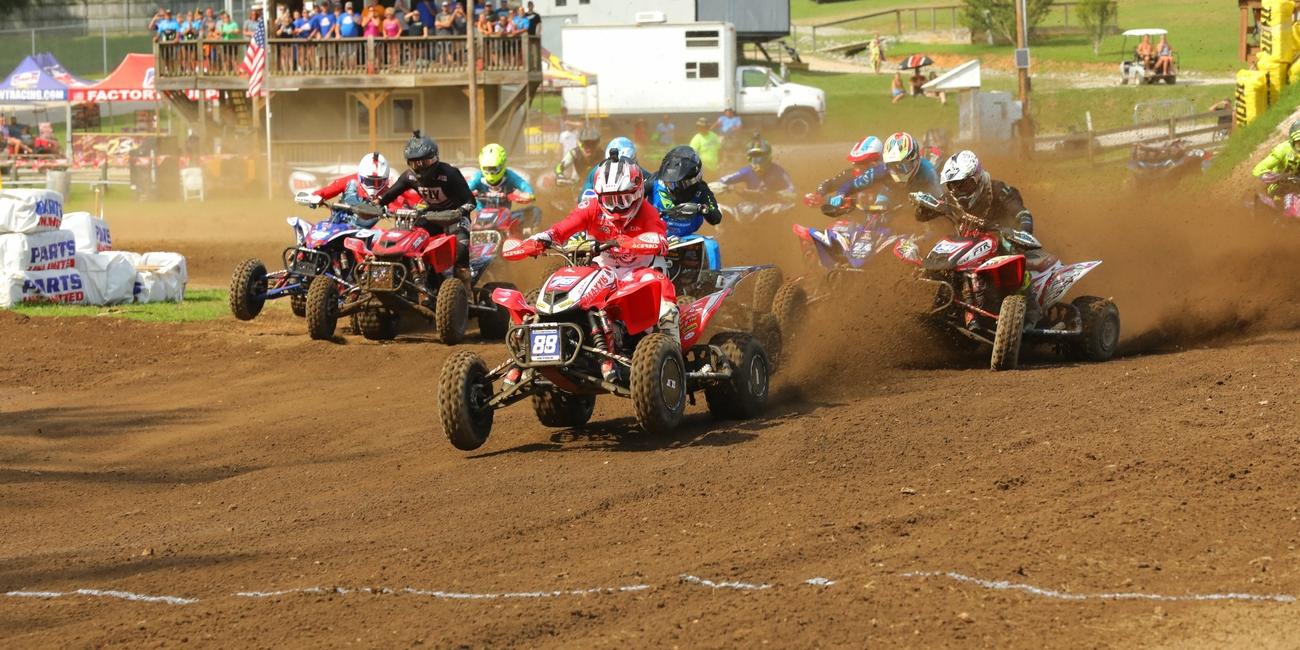 HURRICANE MILLS, Tenn. (August 12, 2019) – This past weekend the 2019 ATV Motocross Championship (ATVMX) Series, an AMA National Championship, took over Loretta Lynn Ranch in Hurricane Mills, Tennessee. Hot and humid conditions greeted the AMA Pro ATV athletes, and the cloud coverage that graced the facility seemed to disperse as the riders lined the gate for moto one. Eighteen riders took to the gate for the penultimate round of racing.

Phoenix Racing Honda/Maxxis Tires/Elka Suspension’s Joel Hetrick would get the jump off the line, grabbing the SSi Decals Holeshot Award. Without any hesitation Hetrick would not look back while placing a gap over the rest of the field. Working his way to the front after a mid-pack start was Wienen Motorsports/Yamaha/Maxxis’ Chad Wienen. As the riders made their way around on the sixth lap Wienen would make the pass on Tbrown 84 Training/CST Tires’ Thomas Brown for second place. Brown, who started in the second place position, would now battle with Wienen to try and get back second place. However, Brown would come through third in the first moto.

Hetrick would come through with the fastest lap of the moto, while also taking the checkered flag 11 seconds ahead of the rest of the competition in moto one. Wienen would be unable to catch Hetrick in moto one, and come through the finish line second in the first moto of the day. Corrosion Specialties/Londerville Steel/Maxxis Tires’ Brandon Hoag started the moto off in third, but would fall back to fourth as the race came to an end. GennUSA Racing/CST Tires/Corrosion Specialties’ Nicholas Gennusa had his work cut out for him during the first moto after he came through 11th on lap one. Gennusa would continue to push throughout the moto, ultimately coming through fifth by the time the checkered flag flew.

As the riders returned to the gate for moto two all eyes were on Hetrick and Wienen, and how the Championship battle was about to play out. Hetrick would once again grab the SSi Decals Holeshot Award, but it would be Brown jumping into the lead after the first turn. It wouldn’t take long for Hetrick to pull up on Brown’s back tires and battle for the lead position. Hetrick would overtake Brown as the two came through on the second lap. Wienen would also work his way up from a fourth place start, and make the pass on Brown for second once again.

Hetrick was not backing down during the second moto, laying down the fastest lap once again and pulling away from the rest of the pack. Wienen was doing his best to catch Hetrick, but would be unable to make up much ground on him and coming through 13 seconds behind him in moto two. Hetrick would take the overall win, and earn enough points to put him in the Championship lead with just one more AMA Pro ATV round remaining. Wienen sits five points behind Hetrick in second, while Brown went 3-3 for third overall and sits third in the points standings.

Hoag and Gennusa would finish fourth and fifth in the second moto, while also rounding out the top five overall from Tennessee. Both Hoag and Gennusa would battle throughout moto two, swapping positions multiple times. Now they will look forward to the last round of racing in two weeks at Ironman Raceway in Indiana.

Ryland Johnson Racing/GBC Motorsports/Ye Ole Cycle Barn’s Westley Wolfe went 6-6 at ATV Dirt Days for sixth overall on the day. Wolfe would push throughout both motos, even running third and fourth for multiple laps. Wolfe currently holds onto the sixth place position in the points standings with one round remaining.

Going 9-7 for seventh overall was Nine6Nine/Barker’s Exhaust/Walsh Race Craft’s Alan Myers. During his ATV Pro Rookie year Myers has been a consistent racer, battling for top five positions at multiple rounds of racing. Jeff Rastrelli Land Grading/Baldwin Motorsports’ Jeffrey Rastrelli went 7-9 on the day to earn eighth overall. Rastrelli holds onto fourth in the points standings, and will be aiming to get back to the front of the pack at the final race of the season.

Koster Racing/Quadified Racing Engines/Walsh Race Craft’s Wes Lewis earned a 10th in moto one, and 8th in moto two for a 9th overall on the day. While Phoenix Racing Honda’s Haedyn Mickelson came through 10th overall after going 12-10 in each moto.

The final round of AMA Pro ATV racing will be in two weeks at Ironman Raceway. This round will be held on Friday, August 23 in conjunction with the Lucas Oil Pro Motocross Championship. Please click HERE for the full weekend schedule.